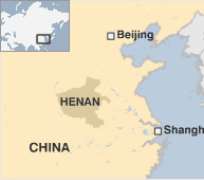 A Chinese man who spent almost 10 years in jail for murder has been freed after his supposed victim was found alive.

Zhao Zuohai had a fight with his neighbour, who then disappeared, and was charged when a headless, decomposed body was found 18 months later.

The miscarriage of justice came to light when the neighbour, Zhao Zhenshang, returned to his village in Henan province to seek welfare support.

He had fled after their fight because he feared he had killed Zhao Zuohai.

Mr Zhao's conviction for murder was reportedly based mainly on a confession.

His brother said police had forced him to drink chilli-tainted water and set off fireworks above his head in order to make him confess.

Correspondents say convictions in the Chinese court system are strongly dependent on confessions, motivating police to use force to get one.

Henan Provincial Higher People's Court has ordered an investigation into the case and the original judges will be punished.

Mr Zhao was initially sentenced to death for the crime, but the sentenced was commuted to 29 years in prison.

While he was in jail, his wife remarried and several of his children were adopted.