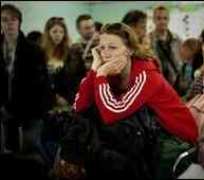 Most European airports, bar a few in Portugal, are due to open as normal.

Eurocontrol, the European air safety body, said some airspace closures were still in place over Iceland, the Atlantic and Portugal.

Porto Santo and Funchal, in Madeira, and Cascais and Lisbon in Portugal will remain closed until at least 1000 GMT.

In all, more than 200 flights were grounded over the weekend in Portugal, including 71 at Lisbon's airport.

There will still be re-routing of aircraft over the Atlantic Ocean on Monday, which may cause some delays.

Portugal, France and Austria were all forced to ground some flights on Sunday night.

In Italy, airports at Milan, Pisa and Florence reopened after midday but disruption was widespread and there were delays for UK-bound flights.

And French authorities grounded at least 70 flights bound for southern Europe from airports in Paris, Lyon, and Nice.

Spanish airspace began returning to normal on Sunday after 19 airports in the north of the country were closed on Saturday.

However, seven airports – Asturias, Santander, Bilbao, Salamanca, Valladolid, Leon and Burgos – were forced to close again from 1600 BST on Sunday.

In Scotland, airports in Inverness, Kirkwall, Wick, Benbecula and Stornoway were shut for a time, but later reopened.

And the Irish Aviation Authority imposed restrictions on Donegal, Sligo and Knock airports in the west of the country on Sunday afternoon

Last month, ash from the Eyjafjallajokull volcano shut down airspace across Europe for five days.

Recent images have shown activity in the volcano increasing and emitting ash up to 20,000ft (6,000m).

Passengers are urged to check details of their flights before travelling to the airport.