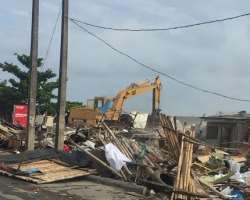 The much-anticipated Clean Up of Ikoyi and Victoria Island areas of Lagos, South commenced simultaneously on Saturday with officials of the State Task Force and other agencies clearing illegal structures and shanties and same being carted away by trucks of the Lagos State Waste Management Authority.

The operation which was led by the Chairman of the State Task Force, Supol Yinka Egbeyemi, featured the usage of bulldozers and pay loaders which demolished all illegal structures on median of Water Corporation Drive.

The team also cleared the Waterfront at Ozumba Mbadiwe of automobile technicians and food courts that have taken over the space.

Officials of the Lagos State Parks and Gardens were also on ground to secure the spaces that have been cleared.

Areas already cleared in Ikoyi include Awolowo Road, Falomo and Bourdillon where disused tyres and horticulturists were removed and taken away.

At Water Corporation Drive, which is also a major infraction point, the road setback which had been converted into brothels and bars and car wash were removed.

The team also cleared Ahmadu Bello Way and the liaison offices that had been converted to makeshift homes and canteens.

Chairman of the Clean Up Committee and Secretary to the State Government, Mr. Tunji Bello, who also visited Ahmadu Bello Way, Ligali Ayorinde and Ozumba Mbadiwe Waterfront to see the extent of the clean up, seized the opportunity to advise residents and property owners with illegal structures to dismantle them before the team comes calling.

The exercise which is a continuous one also featured the presence of representative of Victoria Island and Ikoyi Residents Association (VIIRA) who supported the initiative of the State government on the clean up exercise.