“The Democrats Should Accept Inability To Win November 8, 2016 Presidential Election In The United States” 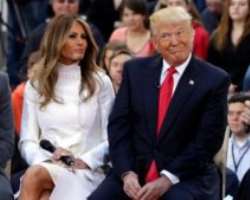 What has even answered pertinent questions been raised by many Americans was the collapse of Hilary Clinton on 11th September, 2016 and her days absent in the campaign trail for days. The writing on the wall is clear, that the picture of Hilary being helped by aides helping her entering a vehicle similar to a hospital ambulance fuels the speculation that she is seriously ill, incapable of running for the presidency of the United States and her absent in the public for many days appears indicative of a more serious medical case.

We, in the Trump for a Great America facebook group believe Hilary Clinton should do a noble service to the people of America, either she steps aside or come clean about her incapacity, and declare not fit to lead America. The truth of the matter is that Hilary ill-health has created frustration for the Democrats and threatened political stability and exacerbates international public scorn and ridicule towards US democratic values.

We disagree with the Democratic Party, which is trying to blind fool the American public that Hilary’s ill-health is nothing new in the US politics. This, the Democrats and their financiers in and outside America want the world to believe that Hilary’s ill-health is just part of US politics. What the Democrats have failed to say is that Hilary has lied to the American people about her health and involvement in the destruction of Libya, assassination of Libyan leader, Colonel Muammar Gadafi and American citizens in Benghazi (Libya), including US Ambassador J. Christopher Stevens; USFS Officer Sean Smith; CIA contractors Tyrone S. Woods and Glen Doherty. It is thus crystal clear to every discerning observer that Hilary’s physical condition has a negative impact on her ability to become next President of the United States of America.

While illness is a natural phenomenon to which none is immune, Hilary Clinton’s physical condition has affected US values and drags American democracy to gigantic shame world wide. Some pundits have revealed that Hilary’s collapsed on 15th anniversary of the terrorist attacks on New York on 11th September, 2016 cannot but should be seen here as a clear manifestation of negligence. We believe the Democrats should act responsibly and see to it that Hilary’s health is given priority attention until she is fit to contest for the presidency of the United States.

The American people are looking forward to a Donald Trump Administration to return their country onto the path of progress and greatness again. The US needs Donald Trump, to make America great again. A victory for Donald Trump is about rebranding the image of America, which has been tainted by Obama/Hilary’s poor leadership.

Hilary Clinton from all moral judgments is too weak to stand the test of the processes leading to the November elections in the US; her ill-health is a testimony that she does not have the capacity to withstand the physical demands of the campaign and therefore the American people prefer to vote amasses for Donald Trump. The hundred million dollar question is that, how can a candidate who cannot pass her medical test represent the United States? Donald is physically strong, able and ready to lead America and make that nation great again. This is why Americans will vote for him. Donald Trump is not seeking the presidency of the US for the sake of president; he seeks the presidency to restore America’s lost pride among the comity of civilized nations.

While we condemn the corporate media’s conspiracy to demonise Donald Trump, we consider President Obama’s anti-Trump rhetoric way below the belt in the midst of popular calls for Hilary to explain her role in the 2012 assassination of US Ambassador J. Christopher Stevens; USFS officer Sean Smith; CIA contractors Tyrone S. Woods and Glen Doherty in Benghazi, Libya as well as her support for ISIS terrorism against American citizens and the world. President Obama to say the least is not fair to Donald Trump and to the American people.

Concluding, we demand a public apology be made by Mr. Obama for demonizing Donald Trump.