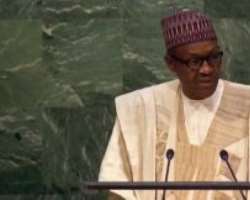 He added that the development was unfortunate due to the fact that the price of crude oil had fallen drastically.

The Special Adviser to the President on Media and Publicity, Mr. Femi Adesina, in a statement, quoted Buhari as saying this while speaking with Nigerian professionals in the United States.

Buhari said, “Those who stole Nigeria dry are not happy. They recruited the militants against us in the Niger Delta, and began to sabotage oil infrastructure.

“We lose millions of barrels per day, at a time when every dollar we can earn, counts. It is a disgrace that a minimum of 27 states, out of 36 that we have in Nigeria, can't pay salaries.”

The President said barely a year after taking office; he was able to decimate Boko Haram despite the fact that he inherited a demoralised military.

He said the terrorist organisation could not lay claim to a single local government again in the country.

Buhari added, “Talking of our military, they earned respect serving in places like Burma, Zaire, Sudan, Liberia, Sierra Leone, and then, suddenly, that same military could no longer secure 14 out of 774 local governments in the country. Insurgents had seized them, calling them some sort of caliphate, and planting their flags there; till we came, and scattered them.

“We raised the morale of our military, changed the leadership, re-equipped and retrained them; the United States of America, Britain, and some other countries helped us, and today, the pride of our military is restored.”

The President said the 16-year rule of the Peoples Democratic Party was characterised by looting and unfinished projects.

He, however, said he would not complain about the state of affairs as the recession had provided the country with an opportunity to be great again, urging Nigerians in the US to return home and develop the country.

Reacting to Buhari's attribution of the militancy in the Niger Delta region to corrupt politicians, the President of the youth arm of the Urhobo Progressive Union, Mr. Ovie Igho, said such statement was not good for national security.

He added that it was not fair for Buhari to have made the statement.

He said, “For the President to have made such a statement during this period is ridiculous. Statements like this are dangerous to national security. And it is unfair.

“If he wants to be fair, he should also attribute the Boko Haram crisis that plagued the administration of former President Goodluck Jonathan to corrupt politicians. That's when we will know he's sincere.

“If President Buhari knows that the militants are sponsored by some politicians, why is he telling us? It means he has the facts. He should go ahead and arrest them.”

Also, the spokesperson for the Ijaw Youth Congress, Mr. Eric Omare, said the statement showed that the President was not being sincere with dialogue with the militants.

He said, “For the President to make such a statement is disappointing. It is a weighty allegation. But if he has the facts, he should go ahead with arresting the politicians rather than resorting to tribal prejudice.

“The ceasefire we are enjoying right now is due to several efforts by some elders here. The utterance of a statement like that is disturbing and it's very important for the President to weigh his statements carefully.”