Gov Okowa And His Renovation Of Delta Governor’s Lodge Abuja In Recession Time: Finally We Can Boast Among States 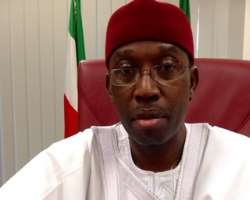 I had just left the church when my phone rang and the caller was mad at me. “Imagine the man you deceived Deltans into believing was a saint using our state money to renovate where he, Hilary and his family will stay in Abuja. Every night and day, you are always on Buhari’s neck but see no wrong in Okowa’s government.

I doubt your credibility as a journalist and an anti corruption activist. Just admit to all of us that you are a silent aide to Okowa and stop all this image laundering you are doing for him ahead of 2019. How can he renovate same lodge that Uduaghan used for eight years and never complained?”

All my explanations to him fell on deaf ears. I had to explain even though I never knew how authentic his complaint was; if truly Governor Ifeanyi Okowa has finally renovated the Governor’s lodge in Abuja. As if it was a plan, one of Delta State prominent critic of the Okowa’s government tagged me on a post, questioning why the governor is insensitive and wasting money to renovate a lodge in a time of recession.

I immediately picked my phone and called the Delta State Government power house to know if it was true that the lodge is undergoing renovation. The answer was in the positive!

I do not speak for the governor or government of Delta State but as a harbinger of truth and credible information, I owe a duty to educate Deltans on why the lodge was renovated. I will be failing in my duties as a journalist and a critic if I keep back my pen, as one who have been to the Governor’s lodge in Abuja and Lagos and not speak.

It is sad and painful to know that most of those who are criticizing and who will criticize the renovation of the Governor’s lodge in Abuja have never been there. I am even fair to them; most of them do not know where it is situated in Abuja and do not know how the building look like. This is the truth.

I have been opportune to go to the governor’s lodge in Abuja and would have slept there but two things stopped it. One, the environment was unfriendly, unkempt, and had no executive aura befitting for even the state liaison officer. Just one government jeep was parked there and from my findings during the few minutes I stay there, the lodge is only active when the governor is around, with none of the staff coming to work, as the environment can make the day sad and gloomy for those who attempt to stay there all day and work. It is unfit to host very important personalities, meetings, conferences or even invite a friend over.

Secondly, the place is far from where I can easily drive to get food and too quiet for my kind of person who love to nose around to scoop news. Unlike the Lagos State lodge that is bubbling with life, this one can best be described as a dead zone. Boredom will kill a man there. I called back that the place is not where I can stay and went to my usual hotel. Ever since then, I have always wondered when Okowa will be bold enough to make the lodge habitable for not just him, but make it have the Delta State, known for taste and ‘doing big things’.

In case Deltans do not know, Okowa has saved us millions of Naira that would legally and ethically been spent keeping permanent rooms in Sheraton Hotels or the Nicon Luxury Hotel whenever he goes to Abuja, but instead chose to channel less than forty percent of such wasteful spending into renovating our collective property.

The Delta State Governor’s lodge is among the degraded and poorly built lodge in Asokoro. As a matter of fact, many governors would have built new ones in line with modern architecture or even broken down some parts of the building for construction, but as a prudent governor, he has only chosen to carry out minor works on the building and change the furniture and kitchen utensils, which some of these critics won’t even agree to take and put in their houses.

The Abuja lodge should not only be very comfortable to the governor to stay but attractive to anyone who comes in. Rather it is the Lagos State governor’s lodge which is not the nation’s capital that has all the features of an executive lodge. This is an aberration. This shouldn’t be so.

It is a shame to all Deltans that we never trended a hashtag calling on Okowa to renovate the lodge since last year, until he had to budget for it last year and started work on it this year. We must begin to encourage our governors to start staying in governors’ lodge built with state funds instead of staying in hotels, and Okowa may just arguably have led the way.

It is not in my place to give details of how much was spent in the renovation. It is contained in the 2016 budget which is in the public domain. It is even doubtful if the amount listed then as the cost of renovating the building will be enough to do so, as prices of materials has risen, just as manpower is more expensive. He has not sent any supplementary budget to the House of Assembly, which means that he is cutting cost.

Delta State is in safe hands. The man on the seat may not take us to the promise land, but like Moses, he will lead us very close. His heart is good, his conscience is at work; just as his thoughts towards the development of the state is a burden to him. Okowa will never fail Delta and Deltans.

Disclaimer: "The views/contents expressed in this article are the sole responsibility of the author(s) and do not necessarily reflect those of The Nigerian Voice. The Nigerian Voice will not be responsible or liable for any inaccurate or incorrect statements contained in this article."
Articles by Fejiro Oliver
18-10-2016  Smiling Enemies Within The Cabinet: Another Open Letter To Gov Ifeanyi Okowa6-10-2016  Opan/gocop Online Publishers: When The Battlefield No Longer Contain Warriors5-10-2016  Open Memo To Gov Ifeanyi Okowa On Road To 2019: Have You Not Be Deceived Enough? Part One30-8-2016  Reflection Of Delta At 25: And Governor Ifeanyi Okowa Goofed In His Moment Of Glory22-8-2016  Tinubu, Pdp And Road To 2019: You Are 100% Wrong Uncle Dele MomoduMore...