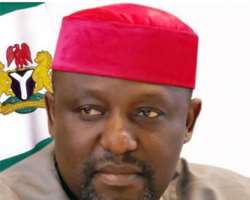 Apparently determined to relocate and destroy Ekeukwu Owerri market, Governor Rochas Okorocha has sent an executive bill to the State House of Assembly to enact a law for this purpose.

The Bill, which was brought before the lawmakers by the member for Aboh Nbaise state constituency, Chief Mike Iheanaetu, is cited as 'A Bill for a law to further enhance the status of Owerri Capital City, otherwise to be known as Imo my pride law of 2016, and for other related purposes'.

The Bill 'provides for the abolishing of the establishment of any form of motor park at any spot, less than four kilometres from the Government House of Imo State'.

It is also the intention of the state government that 'all markets, as defined in this law, shall be sited at least, at a location four kilometres from the Government House of Imo State'.

While a provision was canvassed for the constitution of a mobile court to be manned by a magistrate, penalties were equally prescribed in the proposed law.

'It shall be an offence to build and operate any market, as defined in this law, at any distance of less than four kilometres from the Imo State Government House.

Defaulters shall be prosecuted and if found guilty, shall be liable to six months imprisonment or a fine of N150,000 or both', the Bill prescribed.

Similarly, a section of the law prescribed that 'it is an offence to erect shanty within the Owerri Capital Territory', and defaulters shall be liable to three months imprisonment or N100,000 fine or both.

However, in a subtle way of not making the law to look as if it was principally targeted at Ekeukwu Owerri, government made three other additions.

'No erection of any structure considered a shanty within the Owerri Capital Territory. All drainage shall be kept clean and made to allow free flow of drainage water at all times by all residents', the Bill prescribed.

Another arm of this Bill, which an Owerri indigene called 'the diversionary tactics of the state government, is the prescribed decent look of houses in the city'.

The Bill states: 'Houses within the Owerri Capital City must maintain a decent look, in compliance to the directive from the Imo State Government, from time to time'.

Vanguard recalls that the indigenes of Owerri are currently having a running battle with the state government over the planned relocation and destruction of their ancestral market.