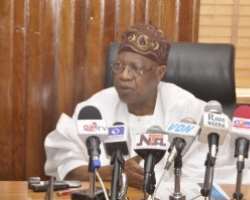 The Federal Government has released concrete proof of its efforts to  secure the release of the Chibok girls, who were abducted from their  school in April 2014 by Boko Haram, confirming President Muhammadu  Buhari’s commitment to the safe return of the girls. Addressing a press conference in Abuja on Friday, the Minister of  Information and Culture, Alhaji Lai Mohammed, said the efforts  included swap arrangements dating back to July 2015 which, however,  failed for various reasons, including last-minute issuance of a new  set of demands by Boko Haram elements.

He said that in spite of the failure of the past swap agreements, the  government and the security agencies have not relented in the bid to  ensure that the Chibok girls are released safely, in line with the  mandate given by the President who, upon the assumption of office,  directed security agencies to urgently fashion out strategies to  trace, locate and ensure the safe and successful release of the Chibok  girls.

Giving details of the first swap agreement, which was the most  promising, Alhaji Mohammed said it failed in the last minute because  Boko Haram decided to make a new set of demands, even after all  arrangements had been made to exchange some Boko Haram fighters for the girls.

”Precisely on 17th July, 2015, the DSS opened negotiations process  with the group holding the Chibok girls. However, in return for the  release of some of these girls, the group also made some demands.  These included the release of some of their fighters arrested including some involved in major terrorist actions, resulting in several fatalities, and others who were experts in manufacture of locally assembled explosives. This was difficult to accept, but appropriate security agencies had to again inform Mr. President of these demands, and its viewed implications. Again Mr. President gave his assent believing that the overall release of these girls remains paramount and sacrosanct.

”Meanwhile, following the above development, Government and the security agencies had sufficient leverage to work out the modalities of the swap. These included creating the safe haven, or necessary place of swap and working out the logistic details. Based on this, the DSS availed other critical sister agencies of this new situation. Immediately, the Nigerian Army and the Air Force sent some specialists to commence a detailed arrangement for the swap. This was during the last week of July 2015 and 1st week of August 2015. The officers representing the various agencies worked out the logistic details, such as the number of persons to be swapped i.e. number of girls and detainees to be exchanged, the vehicles and aircraft, as well as safeguards, i.e. safety of the persons, including the location of the swap.

”When it was finally agreed by all parties, Mr. President was again informed that the preparations were concluded, and the  first step for the swap would commence on 1st August, 2015. Mr. President robustly gave his approval. On 4th August, 2015, the persons who were to be part of the swap arrangements and all others involved in the operation were transported to Maiduguri, Borno State. This team, with the lead facilitator, continued the contact with the group holding the Chibok girls. The Service was able to further prove to the group its sincerity, as it established communication contact between it and its detained members.

”All things were in place for the swap which was mutually agreed. Expectations were high. Unfortunately, after more than two (2) weeks of negotiation and bargains, the group, just at the dying moments, issued new set of demands, never bargained for or discussed by the group before the movement to Maiduguri. All this while, the security agencies waited patiently. This development stalled what would have been the first release process of the Chibok girls,” he said.

The Minister also gave the details of two more swap attempts that were made following the failure of the first agreement.

”By the month of November, precisely 13th November, 2015, another fresh negotiation process with the group was initiated. This time, there was the need to discuss a fresh component in other to avoid issues that had stalled the former arrangement. There were however some problems that many may not discern, but should be expected in this kind of situation. Some critical persons within the group who played such vital role in August, 2015 were discovered to be dead during combat action or as a result of the emerging rift amongst members of the group then. These two factors delayed the process.

”By 30th November, 2015 it was becoming glaring that the division amongst the group was more profound. This affected the swap process. By 10th December, 2015, another negotiation process was in place, but this failed to achieve results because of the varying demands by the group,” he said, assuring that in spite of the failures, negotiation continued on new modalities to secure the release of the girls.

The Minister said since the beginning of 2016, the security agencies have not only remained committed but have also taken the lead to resolve the Chibok girls' issue, in spite of the current division among members of the terrorist group, which has seriously affected the efforts

He commended the security agencies whom, he said, have sacrificed  their time and energy, with some even paying the supreme price while  fighting for the safe release of the girls, disclosing that many  friendly countries and organizations have equally been very  forthcoming in providing their human and technological resources to  assist in the process.

Addressing the parents and relatives of the Chibok girls, Alhaji  Mohammed said: ”We are with you; we feel your pains and shall not  relent until we succeed in bringing home our girls and every other  citizen abducted by the group.”

He also appealed to ”all those who have shown concern in resolving  this matter” to continue to trust the efforts of Government to deal  with the situation.

Minister of Information and Culture, Alhaji Lai Mohammed, flanked by  the Permanent Secretary in the Ministry, Mrs Ayo Adesugba, Special  Assistants Segun Adeyemi and Williams Adeleye and Director in the  Ministry Peter Dama, at a press conference addressed by the Minister  in Abuja on Friday