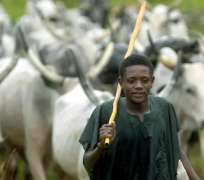 The five Fulani herdsmen arrested for the killing of over 40 persons at Nimbo in Uzo Uwani Local Government Area of the state on May 25, 2016, have dragged the Attorney General of Enugu State and Commissioner for Justice, Mr Mellitus Eze and the Inspector General of Police, IGP, Idris Mohammed before the Federal High Court, Enugu, following their alleged failure to try them, five months after their arrest and detention. Governor Ifeanyi Ugwuanyi of Enugu State, (left) sympathizing with one of the victims of herdsmens Monday attack in Nimbo, admitted at Holy Cross Hospital, Nsukka, Enugu State, yesterday.

The Civil Rights Realisation and Advancement Network, CRRAN, sued the two defendants on behalf of the five suspects. In the suit, CRRAN stated that both the Attorney General and the IGP, failed to commence the criminal trial of the five suspects of Nimbo massacre, including Mohammed Zurai, Ciroma Musa, Saleh Adamu, Suleiman Laute and Haruna Laute. A statement by the President of CRRAN, Olu Omotayo in Enugu, yesterday, stated that the suit became “imperative in view of the blunt refusal of the Attorney General to perform his constitutional duty to arraign the five detained suspects for criminal trial despite our written application to his office to that effect.”

Omotayo said that CRRAN was seeking the court's declarations that “the continued detention of the suspects at the police headquarters, Abuja, by respondents since the 25th day of May 2016, without trial, and the refusal of the 1st Respondent who was under the misconception of law that he needs the consent of the Federal Attorney General and the Presidency to arraign them for trial before a court of competent jurisdiction constitutes a flagrant violation of the applicants' fundamental rights guaranteed under sections 34, 35 and 36(5) of the 1999 Constitution and Articles 5, 6 & 7, of the African Charter on Human & Peoples Rights, (Ratification and Enforcement Act) Cap. A9 Laws of the Federation of Nigeria, 2004 and therefore illegal, unconstitutional, null and void. “An order of the court directing the Enugu State Attorney General and Commissioner for Justice to charge the applicants to court forthwith for whatever offence they might have committed or order their release if the state is not ready to prosecute them.”

In an affidavit in support of the suit, the plaintiffs stated that on April 25 this year, the peaceful town of Ukpabi Nimbo in Uzo Uwani Local Government Area of Enugu State, was attacked at dawn and over 50 innocent souls were sent to their early graves while almost 100 were wounded and houses razed by the attackers after setting buildings on fire. “That on May 25, 2016, the police headquarters, Abuja, under the leadership of the then IGP, Solomon Arase, retd, paraded the plaintiffs as suspects in the case. “The IGP further maintained at the press briefing of May 25, 2016, that there were overwhelming evidence against the suspects as video recording of the massacre was also found on one of them.”

Save Enugu State from Fulani herdsmen Meantime, member, Enugu state House of Assembly, Hon. Sunday Ude-Okoye representing Awgu North Constituency, has cried out to every Nigerian to come to Enugu State and rescue the people because Fulani herdsmen have systematically planned to wipe them out. Ude-Okoye who made the plea on the floor of the House yesterday, was reacting to a recent attack carried out on Attakwu-Akegbe, Nkanu West Local Government of the state at which a seminarian and a woman were murdered and three others seriously injured.

The lawmaker who cast his mind back to the mayhem carried out on Ukpabi-Nimbo in Uzo-Uwani Local Government Area of the state, lamented that the herdsmen have threatened to attack another community, Aku in Igbo-Etiti Local Government Area. Security agencies assure Ugwuanyi of adequate safety But in a swift reaction, security agencies in Enugu State comprising the Nigeria Police Force, the Army and the Department of State Services (DSS) have assured Governor Ifeanyi Ugwuany and the people of Aku community in Igbo–Etiti Local Government Area that the security of lives and property in the area would be guaranteed.

Governor Ugwuanyi was at the community upon receiving a distress call from a priest and principal of St. James Boys Secondary School, Aku, Rev. Fr. Patrick Ujah, over the rumored planned attack. The principal who received the governor at the school's premises, commended him for his prompt response to his call, saying the gesture was an indication that he is a responsive leader who cares for his people.