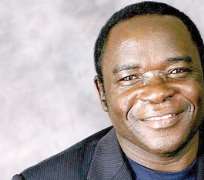 The Catholic Bishop of Sokoto Diocese, Bishop Matthew Kukah, has asked President Muhammadu Buhari to stop agonising about the past administration but to tackle the challenges facing the country.

He said Nigerians did not vote for him ( Buhari) to complain about previous government but to perform better than his predecessor.

The clergymen stated this at a dinner organised by the Ondo State Government after the 2016 Catholic Bishops Conference of Nigeria held in Akure, the state capital on Wednesday.

He said, 'We didn't  vote a government to complain about yesterday, if we wanted yesterday the new government would not be there. The previous government didn't only do bad things; he did a lot of good things.

'I think the business of government is not our business; our business is, the previous government did bad, that is why we voted a new government. It is really about taking responsibility. No matter how much you praise or abuse (former President Goodluck) Jonathan, he is no more the President of Nigeria. I think that people must understand that you take power to solve problems not to agonise.

Kukah added that the only way the current administration could succeed in fighting corruption was to first solve the problem  of poverty and inequality in the country.

'I still believe that unless we get to the root cause of poverty and inequality, which are really the evidences and symptoms of corruption; you can talk of fighting corruption all the rest of your life and very little is going to happen.

'Sending people to prison will only be useful if it puts bread on the table of the people, ' the Catholic cleric said.

In his remarks at the dinner, the Ondo State Governor, Dr. Olusegun Mimiko, reiterated his call for the restructuring of Nigeria to reflect the needed true federalism as the only panacea for the development of the country.

Mimiko expressed worries that the Federal Government was biting more than it could chew with the larger percentage of the resources at its disposal to the detriment of the federating units.

The governor posited that the problem of corruption facing Nigeria could be addressed with the right policy.

He called for the prayers of the religious leaders in the country to tackle inter-religious conflicts, noting that the (conflicts) might lead the country to more danger that might be difficult to overcome.

'Government has the responsibility of bringing these bigots to book. We are not comfortable with what the bigots are doing. What they are doing is most worrisome in Nigeria. The Church has a major role to play by praying for Nigeria,' the governor added.

Meanwhile, about 200  pastors and bishops from the Anglican Church across Nigeria  are  currently in Makurdi, the Benue State capital, for a one-week conference where they would pray for the peace, security and development of the country.

The Benue State Governor  Samuel Ortom, while declaring the conference open at the Benue State University, Makurdi, expressed excitement that the state was hosting the All Anglican Clergy Conference and assured the pastors that their security would be guaranteed.

Ortom said, ''The government and people of the state believe in divine intervention in human affairs and my conviction accounted for the dedication of the state to God at the end of May, this year.

'My faith in God right from my teenage years has accounted for my elevation from a humble beginning to the present status and I'm resolute in my determination to serve God wholeheartedly.''

He expressed appreciation to the Primate of the Church, Most Reverend Bishop Nicholas Okoh, and other clergy and the laity of the church, for making themselves available for God to use them to bless the present generation.

Ortom urged them to carry on with their activities at the conference without any fear of molestation and advised Benue people to put their trust in God to experience breakthrough in all facets of life.

He said he was sure that the conference would bring blessings to the people of the state as well as all the delegates.

The governor assured the people that his administration was working tirelessly to revamp the agricultural value chain, which he said, would turn around the economy for the better.

In his remark, Okoh thanked Ortom for his contributions toward the success of the conference.

He reiterated the anti-gay stand of the Anglican Church in Nigeria and advised members of the clergy who had gay tendencies to resign their position honourably or risk being disgraced out of the church. – Punch