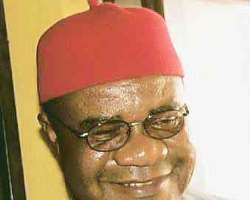 The National Chairman of the Peoples Democratic Party, Chief Vincent Ogbulafor will on Monday (today) appear before Justice Ishaq Bello of an Abuja High Court over alleged N104m fraud.

The spokesperson of the Independent Corrupt Practices and Other Related Offences Commission, Mr. Mike Sowe, has also in an interview with our correspondent in Abuja on Sunday, confirmed that Ogbulafor would be in court.

The development followed the suspension of strike embarked upon by the Judiciary Staff Union of Nigeria.

Ogbulafor, who is being prosecuted by the ICPC on an alleged 16-count charge, was said to have in conjunction with the Director of Budget Implementation at the Federal Ministry of Finance, Mr. Chukwura Bosah, defrauded the Federal Government of the said N104m.

The offence was allegedly committed in 2001 during the administration of ex-President Olusegun Obasanjo when Ogbulafor was Minister of Special Duties (Economic Affairs).

The PDP chairman was said to have conspired with Bosah to falsify fictitious contracts purportedly executed by companies in which they had vested interests.

They were said to have proceeded to ensure that the companies were paid huge sums of money for non-existent contracts and allegedly shared the proceeds thereafter.

The ICPC had obtained leave of the court to arraign the PDP chairman, Emeka Ebilah, Henry Ikoh and Bosah on the fraudulent charges.

They were expected to be arraigned last Monday but the arraignment could not hold because of the public holiday in commemoration of Workers' Day.

The court therefore issued hearing notices to the parties involved in the suit to arraign them last Tuesday.

But their arraignment was also stalled by the JUSUN strike.