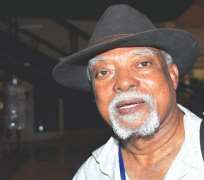 Buhari, in a statement issued by his spokesman, felicitated with the poet, novelist, academic and versatile journalist, who has lived and worked in Nigeria for 50 years, since 1966.

As he turns 75 years, the President commended Barret for his love for Nigeria, which inspired his relocation from the Caribbean to settle in the country, raise a family and also take up citizenship in the 80’s.

Buhari expressed belief that the thematic thrusts of Barret's writings on Africa, Africans in Diaspora and Afro-Americans have contributed significantly to global discourse on the history and identity of the black race, and the renewed interest in the future of Africa and people of African descent.

He prayed that the Almighty God will grant Barret longer life, good health and strength to keep projecting his ideas.