Chelsea's real big test comes up against Liverpool on Friday 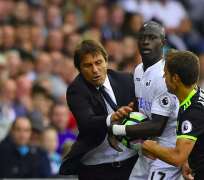 It’s a short(er) turnaround for Chelsea this week, from Sunday and a trip to Wales to Friday and a date with Liverpool under the lights at Stamford Bridge. It’s Friday Night Lights, Premier League-style!

For Chelsea, it’s also the start of the meaty part of the schedule, with games against Liverpool, Leicester City (in the League Cup) and Arsenal coming up in the next ten days before a trip to hot-starting Hull City leads us into another international break. Following that fortnight of boredom, Chelsea will play Leicester City again (this time in the league) and then … wait for it … Jose Mourinho’s Manchester United. Dun-dun-DUN!

The schedule makers took it easy on Antonio Conte at the start of his Chelsea career, but now we’ll get to find out just how much progress the team have truly made in the last few months.

Complicating the task is the second semi-serious injury of the season, John Terry’s twisted ankle from Sunday’s draw, which will keep the Chelsea captain out of action for at least a week. This means that Conte will have to change someone other than just the right winger in his starting lineup.