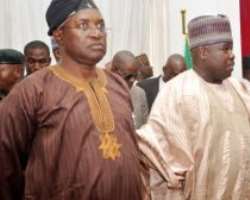 A factional national chairman of the Peoples Democratic Party (PDP), Senator Ali Modu Sheriff‎, has rejected the Board of Trustees (BoT) proposals for truce, insisting that the Senator Ahmed Makarfi-led National Caretaker Committee must be dissolved. Sheriff also said the tenure of the BoT chairman, Senator Walid Jibrin, has expired and accused him of bringing crisis into the party. He insisted that he (Jibrin) should vacate his office for a new leadership of the board to be constituted.

The BoT led by Senator Jibrin, had Monday, in Abuja, asked Makarfi to organise a fresh national convention of the PDP in Abuja, call for an emergency National Executive Committee (NEC) meeting to be summoned by Makarfi and asked the Makarfi-led caretaker committee to constitute a fresh convention planning committee involving Senator Ali Modu Sheriff's loyalists among others.

But Sheriff told newsmen Tuesday, in Abuja, through his deputy, Dr. Cairo Ojougboh and his special adviser on media, Inuwa Bwala, that the BoT proposals fell short of ‎the decisions recently reached with the reconciliation committee headed by Governor Seriake Dickson of Bayelsa State and a former deputy senate president, Ibrahim Mantu.

“We completely reject the vote of confidence past on the illegal caretaker committee because a committee that has failed twice to successfully organize a convention on two occasion is a failure.

“We, therefore, call on his friends and associates and family to advice him to do the needful and resign now to save multi-party democracy in Nigeria and stop impunity that has been the bone of internal democracy.

“That the BoT chairman, Senator Walid Jibrin's chairmanship has brought crisis to the party. In any case his tenure has expired as he has spent more than 10 years as Secretary and Chairman BoT which runs contrary to the Constitution,” he said.\Naij.com