By Our Guwahati Correspondent 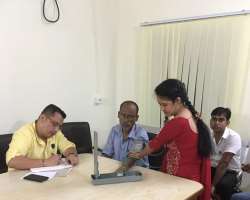 Guwahati: The second episode of ‘Evening with a Doctor’ Program, organized by Guwahati Press Club in its campus on Saturday, was graced by two physicians from the city Down Town Hospital.

They were supported by nursing staff of the hospital Ankita Bora & Anusmita Das with Sajal Sinha, Pranjit Sarma and Mayuri Bora, where the participants got their basic health status checked during the program (5 to 8 pm).

Emphasizing on preventive healthcare initiatives for the member-journalists of the press club, the weekly evening OPD program was launched on 20 August 2016.

The first program under the series was graced by Dr Kashyap Kr Das (Department of Medicine, Dispur Hospitals, Guwahati).

Mentionable is that the doctor's chamber in the press club premises was constructed with sponsorship of Dr Jayanta Bardoloi of Dispur Hospitals.

The room was inaugurated by young citizens Dhiman, Kristi, Shantanava, Arya, Shambhavi, Nistha and Arunava on the occasion of 70th Independence Day.