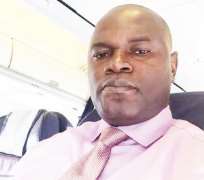 Atsuwete, an Itsekiri from Delta State, was killed at his house in Aluu, very close to the University of Port Harcourt.

Atsuwete, an Itsekiri from Delta State, was killed at his house in Aluu, very close to the University of Port Harcourt.

It was gathered that the gunmen stormed Atsuete's residence, cornered him and shot him several times.

Atsuete, a lawyer to the All Progressives Congress in Rivers State,  was one of the counsels for the former chairman of the Asari-Toru Local Government Area, Ojukaye Flag Amachree, before he was assassinated.

He was one of the speakers at the just concluded conference of the Nigerian Bar Association, held in Port Harcourt.

A close confidant of the deceased and human rights activist, Mr. Anyakwe Nsirimovu, expressed shock over the incident, adding that “Ken Atsuete's lifeless body is currently lying at the University of Port Harcourt Teaching Hospital mortuary.

A human rights activist and the National Convener of the Doing Democracy Movement, Mr. Anyakwe Nsirimovu, has described the late Ken Atsuete, who was murdered on Sunday night as a lawyer, who defended the poor.

Nsirimovu was quoted in a report by The Punch as saying that  the slain lawyer was interested in speaking the truth and added that Atsuete died for the truth.

Neighbours, who saw him rolling on the ground in pains, rushed him to the University of Port Harcourt Teaching Hospital, where he was confirmed dead.

Nsirimovu described the deceased  as a fearless human rights lawyer, who yearned for a better society, even as he lamented that his friend could be killed in such a gruesome manner.

“He was a fearless human rights lawyer, who was ready to speak the truth at any given time. He defended people in court without collecting money and was not afraid of speaking his mind,” the DDM national convener said amid tears.

Recalling that Atsuete had on Saturday received his wife, Mrs. Atsuete, who had been in London for some time at the airport, Nsirimovu wondered how the wife of the murdered lawyer would be able to withstand the ugly incident.

He said, “Since his (Atsuete's) wife came back from London, they have all been at home. The woman came back to Nigeria from London on Saturday.

“Ken (Atsuete) was at the airport to welcome his wife and children and now, he is dead. Only God knows what that young lady will do.”