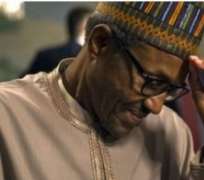 President Muhammadu Buhari will ask parliament for extra powers for one year allowing him to take “emergency” decisions to revive the flagging economy, a government source said on Monday.

Africa's biggest economy contradicted in the first quarter and government officials have said recession is likely as vital oil revenues have crashed due to low crude prices. GDP data for the second quarter is due this week.

The government put together a bill titled “Emergency Economic Stabilisation” giving Buhari extra powers such as amending laws which will be submitted to parliament.

Buhari is seeking to accelerate plans to improve the investment climate. The bill would allow him for example to ease visa restrictions for investors and give them incentives, plans that have been delayed.

In June, the central bank floated the naira, allowing the currency to devalue by around 40 percent to attract investment and ease hard currency shortages.

But critics of Buhari says the government has not done enough to end Nigeria's worst economic crisis for decades. Tens of thousands of workers have been laid off, while companies across sectors say they cannot get enough hard currency to import spare parts or raw materials.

There was no immediate reaction from the two chambers of parliament which is currently in recess.