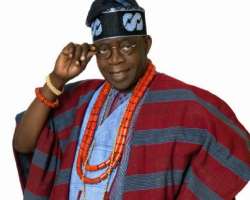 If the facts are contrary to any predictions, then the hypothesis is wrong no matter how appealing.---David Douglass

If there are ten men I hold in high esteem when it comes with the dribbling of the pen, it’s Dele Momodu. I grew up reading him and since I picked up the pen as a professional journalist, writer and growing poet, I still drink from his fountain of knowledge.

In various write-ups, he has aptly predicted the political mathematic of the nation and his answers were always right, even if not in same formula which he solved it with.

His latest piece titled ‘Tinubu, PDP and road to 2019’ kept me glued to my tablet, despite various Whatsapp pings that needed my urgent response. I was just focused on reading to the end the captivating wordings. If it was written by a young writer like me, I would easily pass it off as a Public Relations work for Asiwaju Bola Tinubu to remain relevant in 2019, but this isn’t the case. This is one write up where Uncle Dele Momodu completely goofed!

For the records, the Yorubas gave a little above Six Hundred Thousand to Buhari and in all of this votes, former President Jonathan scored the required 25% in all the South West States, and had a good outing. He roundly defeated Buhari in Ekiti State. As a matter of fact, it was a near 50:50 vote in the Yoruba States during the 2015 elections. To conclude that Buhari needs Yorubas to win the 2019 election is a slap on his own kinsmen who rallied round him. It is also a slap on the Yoruba race to tie their political and voting destiny who is but a man with control in Lagos and Osun States.

Two factors were responsible for Buhari’s victory; the influence of the social media youths who packaged a dictator as a democrat and the Northern votes. The votes of the Yorubas were insignificant to his victory. Tinubu’s role in his emergence ended the very day the All Progressive Congress (APC) concluded their primaries. From there, the social media folks whether they took money or not from the party held the ace. The youths who were angry over the immigration exercise, Chibok Girls and many other atrocities of the past government vented their anger by voting out GEJ, not because Tinubu told them to do so, but because they just wanted to experience new person and party in government.

Uncle Momodu was entirely wrong when he wrote that Nigerians will be comfortable with a Muslim Muslim ticket if Buhari fields Tinubu as his running mate or Buhari supports Tinubu as President but fields Nasir El Rufai as his running mate. I do not want to believe that he agreed with himself while writing it. Citing 1993 elections when Moshood Abiola chose Baba Gana Kingibe as his running mate is one error that even an average Nigerian knows can never work. Which El Rufai? The one that sent a law regulating religious practice or the one that is fast fading after the camera show in his first year in office?

The scenario of 1993 is not same with 2019, when everyone is religion conscious. In 1993, even if a Christian-Christian ticket was chosen, Nigerians would still have voted them. They were just eager to send away the military junta. What are they eager about this time that they will allow soap enter their eyes by voting for a joint Muslim ticket? May I remind Uncle Momodu that the PDP has already zoned the Presidency to the North, thus any attempt for APC to take away the Presidency from the North will automatically means a return to power. Testing the waters to see how Nigerians will react if Tinubu is chosen as a running mate to Buhari or chosen as Presidential candidate is DOA (Dead on arrival).

Ascribing any glory to Lagos State in the victory of Buhari is another error by Momodu. The strength of Lagos does not lie in its indigenes but non indigenes. This fear was captured by Tinubu during the last election. Let us set the record straight. Who controls Lagos does not control Nigeria, despite its economic importance to the country. Economies do not vote but people do. This is why Kano, Bauchi, Borno, and the North will always be the deciding factor in every election, since they have the population. It took just Kano State votes to deflate the huge votes of Rivers and Akwa Ibom State during the last elections. If Lagos was such a powerful factor, Olusegun Obasanjo who lost Lagos in 2003 won’t have won.

The North will be another deciding factor again. But the ultimate deciding factor will be the South South and the South East if they agree to team up to give a bloc vote to the PDP; then we should be ready to have PDP back at the Federal level. This is not impossible, as the party candidate will come from the North, thus leading to divided votes between Buhari or any APC candidate they chose.

The field will now be left entirely for South South and South East to decide. Osun is as good as gone to PDP with Rauf Aregbesola poor governance just as Ekiti State is a walk over. Ondo State and Ogun will no doubt be divided but for Lagos State where the economy of top business men have crumbled, due to Buhari’s poor economic policies that have driven many families out of work, it will be protest votes against APC. For Lagos therefore, it’s a win for the PDP.

For Goodluck Jonathan returning as President, it’s a no deal. For PDP, it’s a Northern candidate and if they are serious of a comeback, then he must be a Muslim as well NEVER a Christian.