...Set to Premiere First at the Toronto Film Festival 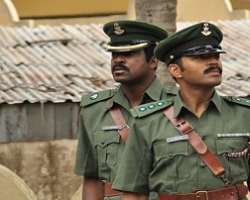 The eventual release of Prince Tonye Princewill's Military Blockbuster, '76' would be an experience well worth the wait.

Mr Wabiye Idoniboye-Obu, the Personal Assistant on Media and Publicity to Prince Tonye Princewill who made this known in a statement said that the movie, which has been in production for over 6 years, and has passed the scrutiny of many movie critics, including having the full endorsement of the Nigerian Army; just recently got the nod of Former President Olusegun Obasanjo who became Head of State to succeed Murtala Mohammed whose assassination is depicted in the film.

.
A private screening was held for the former president at his Presidential library in Abeokuta, Ogun State. The former President used the opportunity to reflect on the events of the past, and reemphasized the importance of the unity of Nigeria.

According to him, the killing of a Muslim on a Friday by a gang thought to be Christians, particularly when we remembered the first coup, which upturned the political situation in the country, gave a very bad signal. We thank God Dimka was caught. What this will amount to; where will it lead us to and how can we get us out of this mess? These were the questions Nigerians had in mind.

While describing the film as “a mixture of sweet and sorrow”, Obasanjo commended the team for the production. He said: “It will make us remind ourselves not to go back to the dark days, which put us in go-no-go situation. We might not yet have lived up to our best, but we have lived through our worst."

He added: “We can have more of this, as there are more national issues that can be portrayed. We are capable of the best and that is what this film has shown,” he said.

The Executive Producer of the film, Prince Tonye Princewill, who led a delegation of the Cast and Crew including Rita Dominic, Izu Ojukwu and Chid Mokeme, responded saying the cast and crew of ‘1976’ were on tour of the country to seek support and stakeholder endorsement for the film, billed to premier in cinemas in November.

“The youth of today need to have a sense of the past, we have no sense of history, hence the resolve to have the film 1976, which is simply called ‘76”, he said.

Princewill said the visit to Obasanjo was important, “considering his position at that time in the country. He was there - in the front row. We deemed it wise to come and show him the film and curry his esteemed endorsement, which as you can see we have just got. We give all the glory to God."

Hours after the former President gave his nod, the landmark cinematic production, hit another milestone by being the first all-Nigerian, made in Nigeria movie chosen to have its own world premiere at the prestigious 41st Toronto International Film Festival (TIFF). This is the first of two in its world tour which is set to span across six continents.

According to the statement, “the film will have its specially laid out red carpet premiere on Sunday the 11th of September 2016 at the one and only Isabel Bader Theatre promises to be a truly unique & momentous occasion. All the key cast, crew and many special guests are all committed to walking the red carpet. Thanks to our Canadian media partners, the event will also be transmitted live via social media. A first for Nigerian audiences”

It would be recalled that the Toronto International Film Festival (TIFF) is one of the most recognized film festivals in the world - a very important partner in facilitating the rise of emerging Oscar contenders, and as a key precursor in the awards race, all eyes will be on TIFF’s full line up, which often hosts high-profile premieres of Oscar-bound movies.