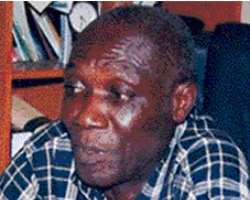 There is nothing in Wale Fanu's countenance to suggest that the 60 year-old is a survivor of sickle cell anaemia. At age 13, the doctor took one look at him and ruled him out of surviving beyond the age of 21.
His modest office which houses Cinecraft Limited, his TV production outfit in Surulere, Lagos, teems with legacies of an accomplished personality.

Fanu has a long line of impressive TV credits dating back to 1970s such as Mirror In The Sun. He has worked with the likes of the late Ishola Ogunsola ( aka Isho Pepper), Dr Ola Balogun, Tunde Kelani, among others.

Fanu spoke on several issues including his early life challenges, marriage, children, the role of his mother and friends as well as his vibrant social life.

My early life
I was born on April 21, 1950. Whether it is from my mother or father, nobody has told me anything and they are both gone. It was not until 1963 that my status was established. Since then, I have been in and out of hospital, managing the situation. Fortunately, none of my children is sickle cell carrier. We are four from my mother and my father has six children. Out of the four, I am the only one with sickle cell disorder. Three sons and one girl.

At the age of 13 and half years in 1963, a medical doctor who had treated me over the years to the point of confusion, subjected me to test and discovered what was wrong with me. That was when I learnt (or was told) that I was suffering from Sickle Cell Anaemia. Before then, I was used to being rushed to the hospital whenever this problem started but I wasn't sure what it was.

It usually starts about one or two in the morning and they would rush me to the hospital and I would be given a jab or two of injection, and at least two days later, I would walk back home. The frequency is hard to recall but I stayed more often in the hospital than home and as a result, had more friends in the hospital than elsewhere. As a boarding student, my condition made me earn the support and understanding of my classmates and teachers such that they knew exactly what to do by the time the crisis began.

Dr Oshodi, a highly respected medical personnel, who was a family friend and personal physician of many years got tired of my sickness and gave my mother a letter to Kano. He was trained in Psychiatric Nursing and was a medical consultant to the late Sarduana, Sir Ahmadu Bello. We left Zaria for Kano to undergo the test and it was not until three days later, that we got to know the results. The result was in a sealed envelope. When he got it, he took a look at it and told my mother that if I was lucky, I would hardly last till my 21st birthday. At my age then, I was oblivious of their interaction but looking back now, I wish I knew the reaction of my late mother then.

My mother as my saviour
In retrospect now, I imagine how many sickle cell carriers would be alive if they had a mother like mine. First and foremost, my mother and I share the same birthday. Emotionally, during period of crises, I used to see both of us going through the pains together because she was always by my side. I think it was a big relief to her to know my status than when she didn't know. It eliminated guess work and anxiety.

From then, her concern became that of me taking my drugs. I went to school with a box of assorted drugs and my classmates would have a good laugh at me. However, the drugs didn't prevent me from occasional crises. At least, once in every two months, I found myself in the hospital. Whenever one knows he or she is a sickler, he or she should become conscious of dos and don'ts. It grieves me to know that several sickle cell induced death cases could have been prevented if properly taking care of. That is why I am coming out to speak about it now.

My dream sickle cell patient forum
My desire is to bring people who are carriers of sickle cell anaemia to discus their issues and seek relief for several people like them who are helpless. Perhaps if we have something like that, we can begin to take it up with the government and engage international agencies. For instance, in the United States now, there are solutions such as bone marrow transplant as well as blood test at pregnancy level to identify sickle cell children. One of the reasons I have decided to come out is that whether one is a carrier or not, a sickler is not supposed to die prematurely.

As Africans, we need to begin to explore alternative remedies. I have wondered why the sickle centre complex in Idi-Araba has taken so long to be completed. Does it mean sickle cell carriers are not reckon with in Nigeria? Dr Olu Ajayi and his team are doing a lot but the support they are getting is not enough. Kudos must however be given to corporate organizations like MTN Nigeria. The statistics of patients far outweigh the resources available.

Near death encounter in 1963
October 1, 1963, I saw the heavens. The pains I experienced was too severe that I begged God to call me home. I was stark naked and nobody could hold me. They had to call in the doctor only to discover that he simply need to empty my bowels and the pains dissipated. If God did not give him that knowledge at that point, I would have been forgotten.

How I became a filmmaker
I found myself in the Federal Film Unit where my love for filmmaking was fanned to flame. From there, I met Tunde Kelani with whom I forged a friendship that transcended business. Since then, I have been exploring ways of developing production technically. There is the artistic and technical part of filmmaking. I have blossomed in the latter. During the challenge on set of Mirror In The Sun, my technical skills came in very handy.

That was at a time when there was not much money to throw around during production, we invented other ways of minimizing cost. Some of my inventions are still around. For instance, when Dr Ola Balogun was shooting Orun Moru, we invented locally made dolly tracks. We sat down with filmmakers and developed the technical aspect. In Mirror In The Sun, we invented a Jib Arm when it became a challenge. I was involved in a lot of Yoruba film productions before the industry crashed.

What you see now is a 'born-again' industry. When we did something with Isho Pepper, we had to buy a small 1.5 generating set. I later moved to TV commercials like Omo, Close-Up, Lipton among others. One of the most popular ones then was Walls Ice Cream and Omo, the later lasted for so long. At the moment, I just finished something for Orange Drugs Pharmaceuticals. I have achieved so much now and I am contented but I feel a heavy burden that I am not complete without inspiring other people in my condition. That you are a sickle cell carrier doesn't mean one should die early.

Sickle cell and filmmaking
The only thing that kept me and Kelani going was absolute trust. If I told him I was sensing a crisis, he knows exactly what to do about it. When I go abroad to work, I am always fully prepared with everything I need for myself. A white producer might feel guilty of over bothering one when he sees one limping. One day, one of them got me a walking stick to ease the stress. He didn't realise that it was a left-over of my condition. The head of my left femur and the hip started to fuse so much that it became difficult to walk.

At age 40, my doctors suggested I undergo operation but we later realized that it was manageable. The same thing happened at age 50, they said that there was no problem because I was still working. Now I am 60, I don't know what they would say. At this age I am seeking to partner people with humanitarian heart to see what we can do about this disease. We don't need to wait till things get out of hand. A family close to me lost two undergraduates within six months due to sickle cell but it shouldn't have happened.

Marriage and children
My wife knew my status from the word go. I could have been that lucky in my case but in present realities, issues such as these should be properly checked and spelt out. I had two marriages with three children who are all AS so I was lucky not to have any SS offspring. The youngest one is 26. Today, people are advised not to gamble with their health, an SS should not marry an AS or a fellow SS for that matter.

My career as a diversion from pain
I am into film and television production. I work on different advertising techniques for different products. I have lived on drugs all my life. I carry on with life as if unaware of my sickle cell status. In most cases, I like to remind myself of my limits especially when it comes to any physically exerting task or duty. My career is like a diversion for me and it is the best thing God has done for me. It is as if, I am nursing a baby which is taking so much attention that I do not remember anything else.

My job has been a huge gamble which has consumed much capital that I can't afford to sleep and watch my investment go away. So I had to be up and doing. There was a time I quarrelled with the British airline officials when I was told that the flight was fully booked. I reminded them that there was always a spare sit in the cockpit and they asked how I knew. I simply replied that I must get a job to London first thing the next morning. Those were times when Nigerians command respect anywhere in the world. A return ticket was 300 Naira only without the need of a visa.

My social life
My status didn't affect my social life because I was surrounded by dependable friends at each point in my life, home and abroad. In that regard, I have been quite blessed. Wherever I went, I didn't hide the fact from anybody that I might need their help at any point in time. During my early years in filmmaking, Tunde Kelani stood by me like a rock. At the moment, most of my best friends are at least ten years younger than I am. I must add that I don't neglect them during their need.

Until Fela Anikulapo-Kuti began to run into problems with politicians, I never missed his shows every weekend. Then, I go visit Jazzville on Fridays, from there to Jazz 38 before I end up in Fela's shrine. Last year, I was still attended Femi Anikulapo-Kuti's shows. I love live shows a lot. But when I am tired, everyone knows that this guy has reached his limits. The same thing happens when I am at work, I move like a force. For instance, my house in Surulere was completed in 14 days.

It is 90 per cent wood unlike the one in Alagbado. I borrowed the idea from what I saw in America. In all, God's grace has seen me through. If people saw me then and I was offered to them as a gift, they won't accept. I was daku daji (always falling sick).