EFCC, Cyber Stalking And The Threat To Freedom Of Expression In Nigeria 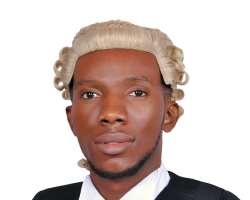 The arrest and detention of a Nigerian blogger and political commentator, Mr Abubakar Sidiq Usman, popularly known as Abusidiq, on Monday the 8th of August, 2016 by the Economic and Financial Crimes Commission (EFCC) over alleged "cyber stalking related offences" has incensed the cyberspace and ignited tirades of lacerations directed at the EFCC and its Acting Chairman, Mr Ibrahim Magu.

This opinion is offered in response to the statement by the anti-corruption agency on the rationale for the arrest of the blogger. In my first intervention on this matter, I demanded that the EFCC should disclose why it went after Abusidiq and release him without further delay. Given the unsatisfactory and questionable explanations offered by the Commission, it is pertinent to critically appraise the offence of cyber stalking vis-a-vis the constitutionality of the offence.

What is Cyber Stalking?
Section 58 of the Cybercrimes (Prohibition, Prevention, Etc) Act, 2015 (hereinafter referred to as the Cybercrimes Act) defines cyber stalking as "a course of conduct directed at a SPECIFIC person that would cause a reasonable person to feel fear." (emphasis mine).

The offence is created by Section 24 of the Cybercrimes Act. Section 24 (1) provides in part as follows:

(a) is grossly offensive, pornographic or of an indecent, obscene or menacing character or causes any such message to be so sent, or,

(b) he knows to be false, for the purpose of causing annoyance, inconvenience, danger, obstruction, insult, injury, criminal intimidation, enmity, hatred, ill will or needless anxiety to another or causes such a message to be sent, commits an offence under this Act and is liable on conviction to a fine of not more than N7,000,000,00 or imprisonment for a term of not more than 3 years or both."

Under Section 24 (2), "A person who knowingly or intentionally transmits or causes the transmission of any communication through a computer system or network -

(b) containing any threat to kidnap any person or any threat to harm the person of another, any demand or request for a ransom for the release of any kidnapped person, to extort from any person, firm, association or corporation, any money or other thing of value, commits an offence and is liable on conviction to imprisonment for a term of 10 years or a minimum fine of N25,000,000.00."

There are other actions relating to transmission of communication through the computer and the network under Section 24 of the Cybercrimes Act that amounts to cyber stalking.

From the foregoing provisions, it is clear that cyber stalking is an offence against the person, and not an offence against the state. The significance of the distinction is that for any person to be arrested or charged with cyber stalking, there must be a specific victim/nominal complainant. An individual must instigate the relevant law enforcement agencies to take action. Also, the victim must be a "reasonable person" who felt fear because of the stalker's course of action.

Does the EFCC have power to prosecute cyber stalking?

By Section 41 of the Cybercrimes Act, the National Security Adviser is to cordinate all relevant security agencies under the Act. Strangely, there is no specific provision on who or which agency can prosecute offences under the Act, like cyber stalking. This is clearly a product of poor legislative draftmanship.

However, Section 47 (1) of the Cybercrimes Act states that:

"Subject to the powers of the Attorney General, relevant law enforcement agencies shall have power to prosecute offences under this Act."

Is the EFCC one of the said "relevant law enforcement agencies"?

Section 58 of the Cybercrimes Act defines law enforcement agencies to include "any agency for the time being responsible for the implementation and enforcement of the provisions of this Act."

There are a total of 59 Sections in the Cybercrimes Act. The EFCC is not mentioned anywhere in any of 59 Sections contained in the main body of the legislation. The only place where the EFCC is mentioned in the Cybercrimes Act is in the First Schedule to the Act where the representatives of the bodies and agencies constituting the Cybercrime National Advisory Council established by Section 42 (1) of the Act are listed. The Council has representatives from twenty-eight (28) institutions and bodies. The EFCC is number nine (9) on the list.

There is no provision under the Cybercrimes Act that specifically empowers the EFCC to prevent, investigate or prosecute cybercrimes.

The only arguable and conceivable legal basis for the EFCC to seek to enforce any provision in the Cybercrimes Act is that it is vested with express and implied powers to prevent, investigate and prosecute economic and financial crimes under Section 6 of the Economic and Financial Crimes Commission (Establishment) Act, 2004 "and any other law or regulation relating to economic and financial crimes including the Criminal Code and Penal Code." See Section 7 (2) (f) of the EFCC Act.

I submit that in the absence of express statutory authorisation, the EFCC cannot, I repeat, CANNOT legally prevent, investigate or prosecute any of the offences created by the Cybercrimes Act except the particular offence is related to or connected with economic and financial crimes. This view is reinforced by the provisions of Sections 6 and 7 of the EFCC Act which limit the commission's mandate to economic and financial crimes and allied offences.

A careful reading of the provisions of the Cybercrimes Act clearly shows that many of the offences created therein have no bearing whatsoever on the mandate and specialisation of the EFCC. Part III (Sections 5 - 36) of the Act is dedicated to offences and penalties. Apart from the offence of cyber stalking, there are several other offences created in the said Part III that do not have any nexus or connection with the functions and mandate of the EFCC.

For example, what is the business of the EFCC with racist and xenophobic offences (Part

III, Section 26)?; or with child pornography and related offences (Part III, Section 24) and other non-financial/economic crimes created by the Cybercrimes Act.

At the risk of repetition, there is no overt or covert element in the offence of cyber stalking under Section 24 of the Act that relates to economic and or financial crimes. If any institution is to prosecute this contentious offence, it should be the Nigeria Police Force.

The Cybercrimes Act was passed last year and assented to by former President Goodluck Jonathan in May 2015. Mechanisms for the smooth operation and administration of the Act are yet to be put in place. Notably, the Attorney General of the Federation is yet to make orders, rules, guidelines or regulations for the efficient implementation of the provisions of the Act or the "procedure for the prosecution of all cybercrimes in line with national and international human rights standards" as required by Section 57 of the Cybercrimes Act. Also, the Cybercrimes National Advisory Council and the National Cyber Security Fund are yet to be constituted, to my knowledge.

So why did the EFCC arrest and detain Mr Abubakar Usman?

From all indications, it is obvious that the blogger was arrested by the EFCC because of a critical online publication against the Chairman of the commission. On August 2, 2016 Mr Usman published a report on his site titled: "EFCC Boss, Magu Commences Total War With Core EFCC Staff"

Who is that specific reasonable person, victim and complainant that felt fear because of the publication? Who petitioned the EFCC and why? Is Magu the victim, complainant, investigator and prosecutor? Why did the EFCC usurped the power of the police? Did the EFCC obtain a warrant from the Federal High Court before embarking on a search on the residence of the blogger as required by Sections 45 and 50 of the Cybercrimes Act? These are some of the questions that beg for answers.

Is cyber stalking consistent with the Nigerian Constitution?

This is a fundamental issue that will be tested in court. Suffice it to say that by the tenor and language of Section 24 of the Cybercrimes Act, it is apparent that the fundamental right of Nigerians to freedom of expression guaranteed by Section 39 of the Constitution of the Federal Republic of Nigeria 1999 (as amended) has been threatened and curtailed.

This is one law that should not be taken with levity. The Cybercrimes Act is worse than the much touted Frivolous Petition Bill (the anti-social media bill). It is unfortunate that this draconian piece of legislation escaped the searchlight of the public during the process of passage in the National Assembly.

With this law, Nigeria has effectively been turned into a police state. The government can conveniently use the provisions of the law to clampdown ruthlessly on its critics and outspoken voices of dissent in the country.

This is far beyond Abusidiq.
Users of Facebook, Twitter, blogs, online publishers and all users of the social media platforms and the entire cyberspace must rise up, speak out and challenge the brazen criminalization of the cyberspace through the instrumentality of the Cybercrimes Act.

What the EFCC has done to Abusidiq is a dangerous precursor to what is to come. If the EFCC which has no power over the offence of cyber stalking can viciously and ruthlessly invoke the provisions of this law in its desperate attempt to intimidate a blogger, one can imagine the extent that the National Security Adviser, the Police, the Department of State Service (DSS) and other security agencies may go in the guise of enforcing the Cybercrimes Act.

Once again, I condemn the arbitrary arrest and detention of Abubakar Usman by the EFCC. Such arrogant abuse of power should not be repeated. Instead of dissipating tax payers money on frivolities, the EFCC should channel its resources towards serious and pending corruption cases.

Finally, let it be known to the EFCC and the present administration that the civil society movement and the human rights community shall resist any attempt to turn Nigeria into a fascist and totalitarian state. Nobody or institution will be allowed to rubbish our democratic gains with impunity.

Mr Magu and the EFCC should not test the collective will of the Nigerian people.