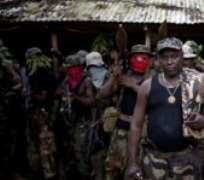 Gunmen disguised as priests, wearing white robes and red caps, have killed three Nigerian soldiers in the oil-producing Niger Delta and made away with their weapons, a military source and residents said.

The attack happened at a jetty in the Nembe area in Bayelsa state, the source said, noting that the military was searching for the men.

The attack in Nembe town inBayelsa state came just days after 11 soldiers lost their lives in an ambush by armed bandits in the north of the country. Security officials and local sources said at least three gunboats may have been seized in the latest attack.

The soldiers killed were part of  'Operation Crocodile Tears', which is trying to secure oil facilities in the Niger Delta. The attack took place at the jetty where about a year ago five soldiers and a policeman were killed and their weapons seized by the gunmen.

No group has said it carried out the raid, but the newly formed Niger Delta Avengers group has carried out a spate of attacks on oil facilities in the Niger Delta this year, which seriously affected Nigeria’s oil revenue.

The militants say they are fighting for the government to use more oil revenue on curbing poverty in the region. One of the militant groups has e ven threatened to secede from Nigeria over perceived injustice against the people of the Niger Delta by the Nigerian state.