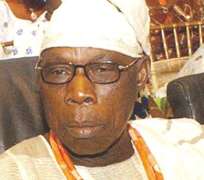 Former Speaker of House of Representatives, Ghali Na'abba on Sunday hit back at former President Olusegun Obasanjo who recently reiterated his position that, National Assembly is full of corrupt people.

Na'abba who was Speaker of the green chamber during President Obasanjo's first tenure said, no Nigerian was more corrupt than the former President.

The former Speaker who stated this while fielding questions from newsmen, also said that, the controversial budget padding could not have been achieved without backing of some members of the executive arm.

Speaking further on the allegation of corruption by the former President, Na'abba said, Obasanjo should explain to Nigerians how he became one of the richest Nigerians after leaving office, when he had virtually nothing before he assumed office.

'As the Speaker, I took Obasanjo on various expenditure offences which he committed, which he could not defend and didn't show any remorse. In fact, that is why sometimes in 2002, the National Assembly tried to impeach him.

'So, he has not got the integrity to call anybody corrupt. This is a man who became the president with nothing, today he is one of the richest Nigerians. Let him explain to Nigerians how he acquired all these wealth,'Na'Abba said.

On the alleged sharing of money during tenure elongation to members of the National Assembly, Na'abba said: 'I am aware that, during the tenure elongation attempt of Obasanjo, money was shared to the members of the National Assembly. It was alleged that, the Senators collected N50million, House of Representatives members collected N40million. But I also know that, it was not all the members that collected this money. Some of them collected, some of them did not. But, I am aware that money was shared.'

On padding row in the House of Representatives, Na'abba said, if items of expenditure were actually added without knowledge of other members of the house, it amounts to padding, which according to him is illegal.

Reacting to the insinuation by the Speaker Yakubu Dogara that padding was not an offence, Ghali Na'abba said, 'It all depends from what angle one is looking at it. The responsibility for appropriation in this country belongs to the National Assembly, So, there is no way that the National Assembly can vote anything and it will be called padding.'

'If you are talking about padding, which I believe is generally accepted to be illegal, it must be a situation whereby certain members of the National Assembly will add certain items of expenditure behind their colleagues. If any item of expenditure is added behind other members, then that item can be said to be illegal and it can be called padding, the former Speaker stated. - The Nation.