I love my body, can't change anything about it – Serena Williams 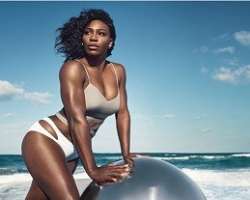 Four times winner of Olympic gold medal, Serena Williams has said that she loves her body and would never change anything about it. Williams was reacting to ridicules from people who said, despite her incredible figures, she still has a strong frame.

'I love my body, and I would never change anything about it,' she said. 'I'm not asking you to like my body. I'm just asking you to let me be me. Because I'm going to influence a girl who does look like me, and I want her to feel good about herself.'

The Top ranking Tennis women's player who appeared on the cover of Self magazine also said that she adhered to a strict diet that did not allow her to eat wheat or sugar in the course of her fight to stay at the top of the Women's Tennis Association rankings, a spot she's held for over 170 weeks. 'I got super disciplined this time, for the first time in a while,' she said. Williams will be journeying to Rio to hopefully win her 5th Olympic gold medal.

Equally talking about BeyoncÃ© who had invited her to twerk it out in the 'Sorry' video, Williams said, 'I was nervous,' Williams laughed. 'But BeyoncÃ© was impressed. I was like, 'Well, you told me to dance like no one was looking!