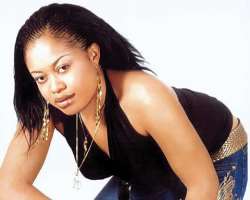 Finally, the Face of Hope 2010 has been announced, she's Nkeiruka Sylvanus. She was declared the new Face of Hope 2010 on Monday, after a long voting session. Nkeiruka forced Ayo Makun and Francis Duru out to settle for the second and third place respectively.

Born in the early 80s into the family of Mr and Mrs Sylvanus Nwazor, Nkeiru hails from Osisioma Ngwa Local Government area of Abia State. She had her primary and secondary school education at Ohabiam Primary and secondary schools in Aba, Abia state. She finished and joined the Nigerian movie industry in 2000, and since then, she has affected a lot of lives and the society positively, with her distinct roles in the films she has featured in.

As an actress and a name to reckon with, she has featured in many popular Nigerian movies which has got her a place amongst the most rated and sought after in the entertainment industry in general. Her passion for her job and the urge to affect lives more positively has taken her where she featured in a couple of movies as well as in charity work. Her efforts at helping to build other growing industries around Africa has earned her many recognition awards, which include ZAFAA Awards in London, Builders and Great Achievers award by Babcok University, Ilishan Remo, Award of Excellence/Abia State Nollywood Ambassador by Nollywood and a few others.

The Face of Hope Project is a-volunteer-based, non-profit, non-religious, non political organisation established to give hope to the hopeless and help to the helpless, taking the less-privileged African children off the streets and providing them with free qualitative education.