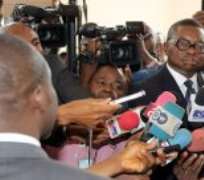 President Muhammadu Buhari on Wednesday  met with his predecessor Dr Goodluck Jonathan at the presidential villa in Abuja.

Jonathan who spoke with journalists after the meeting underscored the need for the continuous unity of Nigeria despite its current economic and political challenges.

Jonathan noted that it will pay no one if Nigeria is balkanize due to violent attacks and militancy.

“We are great because of our size, the human resources we have, the diversity we have, if we fragmentise the country into small components we will be forgotten by the world,” the former president said.

“Those of you that have followed my talks when I was here, my emphasis is that we need a united Nigeria and I always emphasize that Nigeria is great not just about the oil – so many countries produce more oil than Nigeria nobody notices them,” Jonathan maintained.

Jonathan who said he was at the Villa, to brief President Buhari of his international engagements, especially his appointment as Africa Union head of elections monitoring, in Zambia stressed that as a former leader, it was part of his responsibility to advice on the affairs of the nation.

According to him “one key thing is that having been a head of a government, a former president you become a state property, that's the privilege you have. But every privilege has its corresponding responsibility, and once you become a state property, most of your international engagement, that has to do with public addresses and some international assignment becomes a national assignment, you brief the president. Even when I was here the former presidents used to do that and see me. I have been coming but most times I come in the night that's why you don't see me”.

Speaking on the his role in mediating in the Niger delta crisis, Jonathan said “It's not just about me but about all the traditional rulers, elders and opinion leaders that are of the Ijaw ethnic nationality; we have been in touch to see that peace reigns in the country”.