Hw Dogara gave $25,000 to each Rep for confidence vote: Jibrin 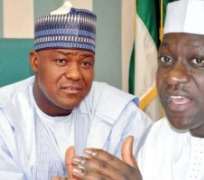 A former Chairman, House Committee on Appropriation, Mr. Abdulmumin Jibrin, on Wednesday alleged that the Speaker, Mr. Yakubu Dogara, handed out $25,000 to lawmakers so that they could pass a vote of confidence on the speaker.

Jibrin claimed that Dogara opened a register at his Asokoro guest house where each member who signed was handed the cash.

Last week, he made a similar allegation against nine members of the House Committee on Appropriation, who disowned him. In the case of the appropriation committee lawmakers, Jibrin alleged that they took a bribe of $20,000 each.

Among those who disowned him were his former Deputy, Mr. Chris Azubuogu, who is still the deputy chairman of the committee.

The members all denied the allegation.
In the latest allegation, the former chairman claimed that the Chairman, House Committee on Basic Education, Mr. Zakari Mohammed, coordinated the disbursement of the cash to lawmakers.

He said Mohammed was assisted by the Chairman, Committee on Interior, Mr. Adams Jagaba, and the Deputy Chief of Staff to the speaker, Mr. Cyril Maduabum.

Jibrin, in a series of tweets on Wednesday, said he was ready for the investigation into his “budget padding” allegations against Dogara by the Economic and Financial Crimes Commission, the Independent Corrupt Practices and other Related Offences Commission and the police.

He denied that he was not being sponsored by external forces to destabilise the House.

Jibrin tweeted, “Fellow Nigerians, in a desperate attempt, corrupt Speaker Dogara and the three others have opened a register for a vote of confidence signature.

“The register is opened at his Asokoro guest house located at Wilberforce Juta Crescent. Hon. members are given $25,000 to sign.

“Investigation by anti-graft agencies is already on and I pledge to support the investigation and prosecution of these corrupt public officers.

“I am also obliged to respond to some allegations that I am sponsored by some external forces to destabilise the House of Representatives.”

“No external forces in this matter; if there are any, they deserve commendation for sponsoring a struggle to wipe out corruption in the House.”

Jibrin added that he expected the four officers to resort to religious “blackmail” against him soon.

Reacting, Dogara's deputy chief of staff, Maduabum, dismissed Jibrin's latest allegation, saying that it was beginning to follow a pattern.

He stated, “The disgraced Hon. Abdulmumin has once again accused me of being involved in coordinating the distribution of $25,000 to various members in the House of Representatives Zonal Caucus  in order to support the Hon. Speaker, Rt. Hon. Dogara Yakubu.

“It is true that he loves mentioning my name, but is he so unintelligent not to notice a pattern. Hon. (Nkem) Abonta disagrees with him on national television, he immediately adds his name in a petition to the EFCC; Hon. (Adams) Jagaba grants an interview against him, he adds his name in the charge sheet which he carries about.

“The Appropriation Committee members disowned him, he immediately alleges inducement of $20,000; the whole House rises against him, then immediately everyone is given $25,000 USD each.

“Can he not see that no one needs to be induced when he is on a one-man riot squad to denigrate all members of the House and pull down the institution of the National Assembly?

Maduabum said Dogara was a “democrat” and an “incorruptible Nigerian,” who would not do any of the acts Jibrin accused him of committing.

However, Mohammed, a former Chairman, House Committee on Media and Public Affairs in the 7th Assembly, denied Jibrin's $25,000 allegation.

Mohammed also described the allegation as “cheap blackmail” and another “tales by moonlight.”

He stated, “I want to state that the accusation is not only untrue but it is another tales by moonlight to hoodwink Nigerians to malign my image.

“Fellow countrymen, please disregard this cheap blackmail aimed at playing to the gallery. I challenge Mr. Jibrin to name at least 10 members or less, who benefited from the bribe.

“My advice to Mr. Jibrin is that he should stop the mud-slinging of my person and concentrate on licking his self-inflicted wounds.”

Meanwhile, the secretariat of the appropriation committee remained shut on Wednesday, the fifth day running.

The Department of State Services operatives still guarded the office, denying members of staff access into the place.