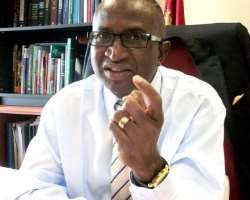 His name was penultimate Wednesday forwarded to the Senate for confirmation along with 18 others to serve on the NDDC board with Mr. Nsima Udo Ekere, former Deputy Governor of Akwa-Ibom as the Managing Director of the commission.

The excitement of the people of Niger Delta over Ndoma-Egba’s nomination as the Chairman of NDDC is because of his records as a Senator of the Federal Republic of Nigeria. They believe that with what he achieved as a lawmaker in the highest legislative body of the country, he certainly would do well in this new assignment.

As a Senator, who represented Cross River Central, he was seen to have effectively attracted numerous key people-oriented projects to his constituency. In the twelve years of his legislative undertakings in the National Assembly, his impact was significantly felt both on the floor of the Red Chamber and on the home front.

A cerebral, intelligent and consummate politician, Ndoma-Egba is highly respected in the country as one of the best Senators Nigeria has produced since the return of democracy in 1999. He is likewise rated as the Senator with the highest number of executed projects influenced from the hallowed chamber of the Senate in the history of Cross River State politics.

When the news got to the people of Cross River that their illustrious son in whom they are well pleased has been nominated to head the NDDC board, there was jubilation galore across the state. According to a report by Bassey Inyang of Thisday Newspaper, Youths in Ikom where the Senator hails from took to the streets to express their delight over the appointment of the man they believe has greatly affected their lives to chair the NDDC board.

Speaking during their march on the streets, Leader of the youths, Prince Ayuk Ojong said: “We are celebrating and thanking President Muhammadu Buhari for nominating Senator Victor Ndoma-Egba, our leader to the NDDC. The appointment is coming at the right time when the Niger Delta region needs serious infrastructural development. I can tell you that as a Senator, Ndoma-Egba attracted not less than seventy-four projects to the state, including the best road in the state, the Trans-African Highway, starting from Cameroon border to Enugu.”

Chief Utum Eteng, a Calabar-based lawyer, public affairs analyst and anti-corruption campaigner was also quoted as saying: “I think the appointment of Senator Ndoma-Egba as chairman of NDDC is a welcome development. It shows that Buhari has ears to the ground and he is a strategist. Ndoma-Egba is highly rated in the south-south region and in Nigeria as a whole having been the leader of south-south caucus in the Senate as well as the Senate Leader, he has all it takes.

He is going to do the service of the President to the people of the south-south zone. With the appointment, Mr. President has shown that he is prepared to carry everybody along including the minorities of the country. The South-south has always fared better when we have a northern president. So, what is happening to the South-south, Cross River State inclusive, is a welcome development. The people of Cross River State are implored to reciprocate Mr. President having actually given appointments to the people of the state.”

For Dr. Sandy Onor, a former Commissioner of Agriculture in Cross River State, “His (Ndoma-Egba) nomination as Chairman of NDDC, is indeed a welcome development for the people of Cross River State and for the entire Niger Delta region. Ndoma-Egba’s experience and his capacity as a technocrat and experienced politician will do the region a lot of good having him as the chairman of NDDC.”

Former governor of Cross River State, Mr. Clement Ebri, equally gave kudos to the President for nominating the ex-Leader of the Senate to oversee the board of the NDDC. Ebri described Ndoma-Egba’s nomination as a good step in the right direction on account of his wealth of experience in public and community service.

In an interview with newsmen in Calabar, the ex-governor said: “I commend Ndoma-Egba’s nomination for the NDDC top job. He has the requisite experience required to perform creditably. I think we should be expecting a lot of development of infrastructure in the entire nine states of the Niger Delta.

His appointment is a clear example of fixing a square peg in a square hole by President Muhammadu Buhari. Ndoma-Egba is a nationalist, and I have confidence that under his watch as chairman, every part of the region will witness tremendous development.”

Ndoma-Egba, currently the Senior Partner of Ndoma-Egba, Ebri & Co. law firm, holds two National honours, Officer of the Federal Republic (OFR) and Commander of the Niger (CON). He was born in Ikom, Cross River State on March 8, 1956. He obtained his LL.B (Honours) degree in 1977, and was called to the Nigerian Bar in 1978.

He later had his second degree, the LL.M from the University of Calabar and also acquired different certificates from the Irish Development Institute, Shannon Ireland, Standford and Harvard Universities in the United States of America. He had extensively practiced law in all the Superior Courts of record for several years.

Elected into the Senate in 2003 to represent Cross River Central Senatorial District, he was elevated to the rank of Senior Advocate of Nigeria in 2004. Before his exit from the Senate in 2015, he had served as Chairman of Senate Committee on Media and Public Affairs (5th Senate), Deputy Senate Leader (6th Senate) and Senate Leader (7th Senate) and is credited with over 38 bills including the Freedom of Information bill which is now an Act.

He was appointed Commissioner for Works and Transport in Old Cross River State at the age of 27. He served as Director of Cross River Basin Development Authority in the 3rd Republic and has chaired the Boards of Companies in the private sector with interest ranging from banking, construction and manufacturing.