Father Mbaka attacks Buhari over rising hunger in the land 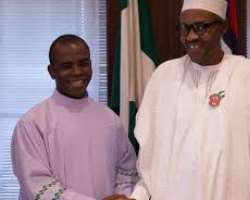 Enugu Catholic priest, and Spiritual Director of the Adoration Ministry, Enugu State, Rev. Fr. Ejike Mbaka, has warned President Muhammadu Buhari that Nigerians will not vote for him in 2019 if he does not address the high level of hunger and suffering  in the country.

Mbaka has been one of Buhari's most vocal supporters since he asked Nigerians to reject the incumbent, Goodluck Jonathan of the Peoples Democratic Party during the 2015 presidential poll and predicted Buhari's victory.

But, in a surprising turn of events, Mbaka attacked Buhari in a recent message, details of which were obtained by journalists on Tuesday night.

In the message, Mbaka noted that there was too much suffering in the country, and faulted the President for not appointing the right people.

He also accused the President of listening to the wrong advice.

“I can't keep quiet when things are going wrong.
“I am telling the President to look around him and know those who are advising him rightly and those who are telling him that there is no trouble.

“The President should know that there is trouble – if things continue like this, in the next election, nobody will vote for him.

“Whether they like it or not, I am speaking the raw truth.

“If the President should have somebody like me and he cannot be talking with me, then there is a problem.

“There is a problem somewhere; somebody who can advise you without asking for anything and he is representing the poor masses in the country and he won't tell you lies.

Continuing, he said, “I don't need the President; I need God, I need the Holy Spirit, I need Jesus; there is suffering everywhere, people are suffering.

“To feed is now a problem, and an hungry man is an angry man.

“Hunger and anger will lead to danger.
“So, let him know whether he can do away with some advisers around him and bring in the people who are experts in economic revamp.

Mbaka said there were  no spaces left in mortuaries across the country.

“Hunger is everywhere, many neighbours don't eat again, many are being attacked by hunger, hunger is becoming a normal thing and there are people responsible for this.

“Mortuary and ambulance business is now thriving because many cannot afford drugs.

“In today's Nigeria, many are becoming hawkers, who will buy from you, with what?

“Everyday, more pipelines  are being blown, the Avengers are at work and up till now, there is no solution.

“You know when certain things begin to happen, you begin to ask some questions, somebody like me will begin to ask – when will this end?

“If it continues in the next three months, there will be no money to pay salaries – the vicious effect is disastrous and when salaries cannot be paid, teachers will come home, students will stop going to school, there will be more kidnappings, more hooliganism, more armed robbery, more prostitution, immorality will be on the increase.”

He urged Buhari to sit up and stop going after the leadership of the Senate.

Mbaka equally bemoaned the continuous depreciation in the value of the naira.

“So, the President should sit up – there is a red light blinking on the country.

“The issue of Saraki and Ekweremadu, nobody wants to listen to such stories any more, whether Saraki is the President of the Senate or Ekweremadu is not this or that, the countrymen are tired of such stories.

“We need economic experts, gurus, sages that are sincere, who can come in and think about our economic revamp and judicial reformation.”