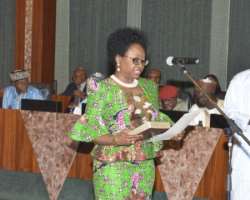 The day of reckoning has come for economic saboteurs who have milking the country resources by filing names of non-existent workers in the payroll of the Civil Service.

The Head of Service of the Federation, Mrs. Winifred Oyo-Ita, said on Monday in Abuja that the Economic and Financial Crimes Commission had commenced interrogation of some civil servants suspected to be involved in the nefarious act.

Oyo-ita said  the measure was aimed at sanitising the civil service in line with global best practices.

The Head of service, while  confirming that the Federal Government was indebted to retired federal civil servants to the tune of N293bn, admitted the dilemma of the government   on how to get resources to offset the debts.

She said, “On assumption of office, I met service-wide staff claims for promotion arrears, first 28 days, repatriation allowance, death benefits and other staff claims totalling about N293bn. The issue was presented to Mr. President and he expressed deep concern and immediately directed the Minister of Finance to address the situation.

“The payments would have been made but for the resource constraints of the government. We are working with the Office of the Accountant-General of the Federation on the phased payment formula and would conclude in due course,” the HoCSF said.

Oyo-Ita spoke while answering questions from journalists after addressing a press briefing in commemoration of the Civil Service Week, scheduled to commence on Wednesday.

Already, she said, some civil servants were being quizzed by the EFCC in relation to the issue of ghost workers.

She said this was the first time in the history of Nigeria that government would be paying strict attention to the issue of ghostworkers, adding that the introduction of the BVN had also helped in exposing the lapses.

“This is the first time the administration is tackling the issue of ghostworkers like this. We are cleaning the Integrated Personnel Payroll Information System and a lot of suspicious names have been detected. The introduction of Banks Verification Number has also helped in the detection of ghost workers. Many people are facing interrogation with the EFCC.

“You will just see them and later you won't find them again; they have not been kidnapped but they are answering different questions from the EFCC,” she said in response to questions on sanctions for those involved.

She however doused apprehension that the Federal Government was planning to retrench some of its workforce due to economic downturn.

Oyo-Ita said the government's main focus was to reduce the number of Ministries, Department and Agencies, saying “restructuring does not equate to retrenchment.”

According to her, the N293bn debt was incurred through factors including service-wide staff claims, particularly those bordering on promotion arrears, First 28 days, repatriation allowance and death benefits among others.

She said the government was considering a phased payment formula, while the Presidency had directed the Minister of Finance, Mrs. Kemi Adeosun, and the Office of the Accountant-General of the Federation to explore ways of making the payments.

Also commenting on the issue of appointments of Permanent Secretaries, tenure extension and the effect of the tenure elongation policy, Oyo-Ita stated that it was the prerogative of the President to appoint a permanent secretary as well as extend the tenure.

She however stated that irregular appointment of those who did not get into the service through the right channel would be reversed.