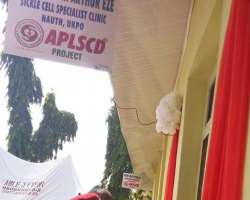 Few months ago the Association of People Living with Sickle Cell Disorder raised an outcry for help, as they were been neglected and rejected by the society for a problem inflicted on them by Ignorance of their parents. Aisha Edward, the Coordinator of the Association went out in search of a lasting solution for her members who were dying gradually after they could no longer stomach the neglect and maltreatment meted on them by the society. Her search for help led her to the Anambra Born Philanthropist, Prince Arthur Eze who saw first-hand the plight of the association and how they were faring under the political subterfuge and unending promises. He volunteered to aid the association in every possible way he could, and from that moment till date has kept his promises and even done more than he promised.

When the need for a Sickle Cell Clinic became inevitable, as sicklers could no longer get the much needed care from public and private health centres due to exorbitant hospital bills, The association rallied round Arthur Eze, who immediately without much plea volunteered to sponsor the construction of a world standard sickle cell clinic for the Association in Ukpo, and to ensure that this promise and hope were never laid to rest, he made a donation of five million naira to be used for the construction, having already provided a space for that effect.

Henceforth Ozoigbondu as he is titled became a radical advocate of sickle cell disorder, having been moved by the pathetic stories of the sicklers. Arthur Eze took his campaigns to the church, as he always spoke vocally against the ignorance of couples and advised them to check their genotypes to avoid bringing into the world sets of kids that would suffer the consequences of their ignorance. He didn’t stop at preaching the good news in churches whenever he got the opportunity to speak to the congregation, he also ensure that the association never lacked any tool it needed for the sickle cell advocacy.

He was among the big donors that made it possible for the Association to paint the town red with the much talked about celebration of World Sickle Day; an event that shall remain on the lips of Anambra Indigenes in a long while. Arthur Eze ensured that the Sickle Cell Clinic was completed and ready for Dedication and Inauguration before the World Sickle cell Day on June 19 2016. He also made provisions that catered for the welfare of Sicklers who came from Adamawa, Enugu, Rivers, Benue and Abia for the celebration in Anambra.

Arthur Eze is a man with extended hands and one that ensures that everyone around is touched when the arms spread. He didn’t stop at building a sickle cell clinic for people Living with Sickle Cell Disorder but also ensured that Nnamdi Azikiwe University Teaching Hospital Ukpo, where the sickle cell clinic is sited received his benevolent touch, as he renovated and remade the hospital into a glooming illumination of beauty and sparkle from the rafters to the tiles, all got a new wing to fly in such beauty that could cure an illness even before it is diagnosed.

Unlike most Philanthropist who give without caring to know whether what they gave actually impacted, Arthur Eze did not stop at his donations, he flew down to Anambra virtually every weekend to inspect the ongoing projects and ensure that all was going as planned. And each of these visits met the sicklers with smiles as they always look forward to his coming, and he makes sure he reaches out to them each time he is in the East.

Arthur Eze could be classified as a rare personae of humility and ingenuity, as he never scared or kept this sicklers away from him like most wealthy and influential persons will, he took them as his kids, always asking after them and allowing them to visit anytime he is around. So it wasn’t a surprise that he was spotted a number of times at the hospital ward where he went to visit the sick one on their sick beds, giving them words of encouragement and paying off their bills to the last kobo.

Few weeks ago, this kind hearted Philanthropist amazed the world when he defrayed the medical registration cost of every sickler in Anambra state, this gesture was to allow all those living with sickle cells disorder to come to the Teaching Hospital for free medical attention, since he has covered all the costs for a year.

Moved by the plea of the Association of People Living with Sicle Cell Disorder (APLSCD), who pleaded on behalf of the causal workers of the Nnamdi Azikiwe Teaching Hospital Ukpo, who were being owed six months salary, Arthur Eze laid off these salaries from his pockets and beckoned on the federal government to try and pay the salaries of these workers when due, as much cannot be expected from a worker who is being owed.

Arthur Eze has not only provided succour for people living with Sickle Cell disorder, but has actively joined in the fight to eradicate the disorder from the country, and he is doing everything possible to ensure that the campaign lasts till no child is born with sickle cell disorder in the country. He is indeed a strong advocate of the cause to end sickle cell in Nigeria.