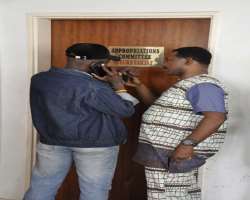 The crisis rocking the House of Representatives over alle­gations of padding the 2016 budget took a different di­mension yesterday with the sealing off of the secretariat of the Appropriations Com­mittee by officers of the De­partment of State Services (DSS).

Room 1.05 office of the embattled former Appropria­tion Committee chairman was also under watch as personnel of another secu­rity agency were stationed around the office.

Former chairman of the Committee, Abdulmumin Ji­brin, who has been locked in a battle of wits with Speaker Yakubu Dogara tweeted yes­terday that security agencies were providing protection for him following requests from his lawyers.

'On the request of my lawyers, security agencies have promptly provided pro­tection for the Appropriation secretariat, my office and house,' he tweeted.

Jibrin had last Thursday alleged that the Speaker di­rected the removal of com­puters and documents from the Committee's secretariat.

Also on Thursday, the lawmaker said he visited the DSS headquarters to for­mally make his complaints against the Speaker, the Deputy-Speaker, Yusuf La­sun, Majority Whip, Alhas­san Doguwa and Minority Leader, Leo Ogor.

Jibrin equally said he had submitted his petition to the Economic and Financial Crimes Commission (EFCC) and the Independent Cor­rupt Practices and Other re­lated Offences Commission (ICPC), adding that 'the case against them ranges from corrupt enrichment, abuse of office and public trust, liv­ing above means, to massive movement of funds in bud­get,' he posted on Twitter.

But at a media briefing yesterday, chairman of House of Representatives Commit­tee on Appropriation, Mus­tapha Dawaki declared that secretariat was still in opera­tion. He also declared that no item was missing or carted away from the Committee's office.

Reading a letter dated July 29, 2016, from the Clerk of the Committee, Abel Ochig­bo to the Acting Clerk, House of Representatives, Moham­med-Omolori and the Chair­man of the Appropriation Committee, Dawaki said: 'The secretariat is intact and has not been threatened in anyway. All records are also intact and safe - both software and hardware.

'In addition, no staff in the secretariat of the committee has been subjected to any form of threat, intimidation or harassment from any quarter whatsoever.'

But in a sharp contrast to his statement, the Clerk of the Committee and his staff were denied access to the office by two security operatives in mufti believed to be from the Presidency.

Journalists that followed the Clerk to the Committee's office spent no less than 30 minutes at its entrance, as the security agents refused the Clerk and his workers access to the office.

When the Committee's Clerk asked the security men at the entrance of the secretar­iat why they were stationed there, they responded that he should seek clearance from above. The clearance did not come until the secretariat staff left, and returned in a dramatic way later to inquire where the officers were from because the National Assem­bly Sergeant-at-Arms did not instruct them.

Meanwhile, Dawaki re­fused to comment on Jibrin's allegations that members of the Committee were handed a bribe of $20,000 to address a press conference to disown him. - The Sun.