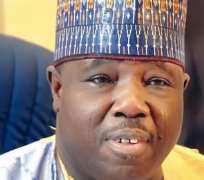 The leadership crisis rocking the Peoples Democratic Party, PDP, deepened on Thursday, as the Federal High Court in Abuja, sacked the Senator Ahmed Makarfi-led Caretaker Committee of the party.

The court, in a ruling by Justice Okon Abang, held that every action the Committee has taken since it emerged through a convention the party purportedly held in Port Harcourt on May 21, amounted to nullity.

'Parties have an uncompromising duty to obey court order until it is set aside. The Lagos Division made orders on May 12 and 20, forbidding the PDP from removing the Sheriff-led Caretaker Committee. That order is still subsisting.

'Having regard to the order of the court, PDP had no lawful authority to hold the convention that led to the emergence of the Markafi-led Committee.

'The convention was unlawfully held and the Caretaker Committee was unlawfully and illegally appointed and could not take any legal decision for the PDP in view of the subsisting order of the Lagos Division of this court.

'Consequently, any action taken by the Markafi-led Committee, including the purported mandate for legal representation in this matter is hereby declared illegal.

'If the Markafi-led Caretaker Committee, as apostles of impunity, missed their way to the Port Harcourt division of this court, that court could not have conveniently assumed jurisdiction to set aside the earlier decision of the Lagos Division.

Justice Abang said he would have voided the judgment of the Port Harcourt Division for being a nullity, assuming there was an application to that effect.

He warned politicians not to cause disaffection among judges of the High Court, saying 'the culture of impunity must stop in this country'.

According to the court, 'Ali Modu Sheriff is the National Chairman of the PDP. Any decision not taken by the Sheriff-led Committee is not binding on the PDP'.

The ruling came on a day two Senior Advocates of Nigeria, SANs, clashed in court over the suit seeking to stop the National Convention of the party billed to hold in Port Harcourt on August 17.

The SANs exchanged heated words over who was duly briefed to represent PDP in the suit which the Ali Modu Sheriff-led faction of the party lodged before the Federal High Court in Abuja.

Whereas one of the senior lawyers, Mr. Ferdinand Obi, SAN, told the court that he was briefed by the Caretaker Committee of the party led by Senator Ahmed Makarfi, his colleague, Mr. Olagoke Fakunle, SAN, maintained that he has the mandate of the 'real PDP leadership' to appear in the matter.

Fakunle's submission infuriated Obi who drew attention of the court to the fact that its Port Harcourt Division had on July 4, sacked Sheriff from office as PDP chairman.

Obi argued that it was ethically wrong for the plaintiffs, led by Sheriff, to contract Fakunle to represent the PDP which they also sued as the 2nd respondent before the court.

'I say with the greatest respect that what is happening before this court today is unfortunate. It is on record that processes for the PDP in this matter was signed by one Bashir Maidugu who was the erstwhile Deputy National Legal Adviser of the party and the 5th plaintiff in this action.

'It is scandalous for a plaintiff to sue a defendant and arrange representation for him. In law, a man cannot be both plaintiff and defendant in the same matter', he argued.

Obi tendered in evidence, the judgment of Justice A. M. Liman of the high court in Port Harcourt in suit No. FHC/PH/CS/524/2016, which he said settled issue of who should receive legal processes or engage a lawyer on behalf of the PDP.

'If all the plaintiffs were actually in office as national officers of the PDP, there will be no basis for them filing this suit. If there is a dispute between them and the PDP, then they should allow the real PDP they are quarrelling with, to defend its action.

'We are duly appointed by the PDP that was recognised in the judgement by Justice Liman, which is the Markafi-led group', Obi submitted.

He said that he had on June 27, filed two separate applications on behalf of the PDP, asking the court to disqualify itself from handling Sheriff's suit on the basis that the matter was already decided by the court in Port Harcourt.

However, Fakunle, SAN, urged the court to not only ignore Obi's submissions, but also order him to immediately withdraw his appearance for the party.

'My lord, it is not in contention that PDP briefed us and we accordingly filed processes on its behalf in this matter.

'My learned colleague here admitted that the 5th defendant who is the National Deputy Legal Adviser of the party did not brief him.

'The judgement of the court in Port Harcourt said absolutely nothing about legal representation for the PDP. That decision is already subject of appeal.

'Moreover, no judge of a coordinate jurisdiction has the power to set-aside or vary the order this court validly made on June 30 which recognised us.

'I urge the court to hold that we are counsel for the PDP and that my learned brother should cease from appearing in this matter forthwith'.

On his part, counsel to the plaintiffs, Chief Niyi Akintola, SAN, prayed the court to firstly determine who between the two senior lawyers has a valid mandate to represent the PDP.

Akintola earlier prayed the court to consider the urgency of the matter and grant an injunction stopping the party from going ahead with its planned national convention, pending the determination of the substantive suit.

'What we are asking for is an injunction and our application is ripe for hearing. We urge my lord to because of the urgency nature of this case and the circumstances surrounding the matter, hear this application and grant our request.

'I urge my lord to hear us out. This matter is very crucial. They want to hold a convention which we are seeking to stop', Akintola pleaded.

He told the court that the Independent National Electoral Commission, INEC, which is the 1st defendant in the matter, was duly served with the relevant court processeson Monday.

INEC lawyer, Mr. Alhassan Umar, however told the court that the plaintiffs were yet to serve it with all the relevant processes.

In his ruling, Justice Abang refused to recognise Obi, SAN, as counsel for PDP in the matter, declaring the two application he filed against hearing of the suit as incompetent.

Specifically, Sheriff and eight others had approached the court, praying it to abort the proposed national convention of the party.

The plaintiffs are contending that allowing the Makarfi-led faction to proceed with the convention would affect the 'Res' of the substantive suit they filed on July 4, wherein they are insisting that their tenure in office ought to expire in 2018.

The plaintiffs said they filed the suit marked FHC/ABJ/CS/464/2016, for themselves and on behalf of the Executive Committee/National Working Committee of the PDP.

Justice Okon Abang had earlier in the proceeding, posed questions which he said the Markafi-led faction should answer to enable the court to determine the issue of legal representation for the party.

Tracing the history of the case, Justice Abang noted that the Lagos division of the high court had on May 12, made an order restraining PDP from conducting any election into offices of its National Chairman, Secretary and Auditor, occupied by 1st, 2nd and 3rd plaintiffs led by Sheriff.

He said the court also barred INEC from monitoring or recognising candidates that emerge from any such election.

'That order is still subsisting and has not been vacated. Yet again, on May 20, the court made another order, directing INEC and PDP to maintain status quo on issue relating to position of the plaintiffs, pending determination of the suit before it.

'Later in the same month, PDP held a convention that removed these plaintiffs and set up a Caretaker Committee that led to the emergence of Markafi who briefed you (Obi) to appear in this matter.

'The question is, does the Port Harcourt division had jurisdiction to entertain proceedings that led to various orders made by it and the judgement delivered on July 4, which neutralised the potency of the previous over by the Lagos Division, with the judges having coordinate jurisdiction?

'That was notwithstanding the fact that under section 249 of the constitution, the Federal High Court is one.

'This is having regards to established principle of law that where an order which ought to have been made, is made in error, a court of coordinate jurisdiction has the power to set it aside', the Judge queried.

Obi's plea for an adjournment to enable him respond to the questions he said were 'germane and weighty', was refused by the court.

While responding to the questions, Obi, maintained that Justice Abang lacked the jurisdiction to evaluate and make findings on the judgment of another court of coordinate jurisdiction.

He argued that all the parties are already before the appellate court over the judgment.

'We submit that this court should avoid a situation whereby it will foist on the court of appeal a situation of hopelessness or render nugatory, whatever judgment that will be eventually delivered by the appellate court.

'This is why the Chief Judge of this court, on July 8, issued a circular to all the judges handling PDP leadership tussle cases to stop further action on the matters pending the outcome of the appeals before the Court of Appeal', he added.

Justice Abang however clarified that the CJ later issued another circular on July 23, cancelling the previous one dated July 8. – Vanguard.