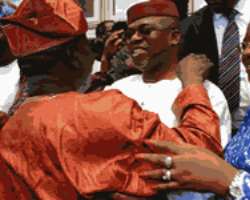 By narrow margin, Ekiti State Governor, Segun Oni retained his seat as the Justice Hamman Barka-led election petition tribunal declared him winner of the April 25, 2009 and May 5, 2009 re-run governorship election in the state yesterday.

The tribunal delivered its judgment on the petition filed by Dr. Kayode Fayemi, governorship candidate of Action Congress (AC) challenging Oni's declaration as governor by the Independent National Electoral Commision (INEC) in the court-ordered polls resulting from a similar petition against Oni's election in 2007.

Yesterday's court's verdict brought to a close an 11-month legal campaign by Fayemi to claim the mandate he believed was his.

The tribunal, in a split judgment of three to two affirmed that Oni won the majority votes in the polls, saying the petitioner failed to prove beyond reasonable doubt some of the grounds of his petition.

However, in a minority decision, two of the judges, Justices Abiodun Adebara and Obande Ogbuninya nullified Oni's election and declared Fayemi as the winner. To boot, they ordered INEC to withdraw the Certificate of Return issued to Oni and issue a fresh one to the petitioner.

He arrived at the figure after deducting results annulled in Ipoti and Ifaki wards from the total votes cast in the election.

Barka whose decision was supported by two other members of the panel, Justices Sulleiman Dikko and Mohammed Goji nullified results of units 1, 3, 5 and 6 of Ipoti Ward B and a unit in Ward A in Ijero local government.

In Ido/Osi local government unit 3, 5, 9 and 13 of Ifaki Ward I were also cancelled by the judges, while in Ifaki Ward II, units 6 result was nullified.

Delivering the judgment which lasted four hours, twenty minutes, Justice Barka added the 2009 election results to those of the remaining local governments where elections had been concluded in 2007 with the exception of Efon local government which was cancelled by the Appeal Court sitting in Ilorin, Kwara to declare Oni winner.

But Justices Adebara and Ogbuninya declared Dr. Fayemi winner of the election, saying the AC candidate scored 106, 146 while Oni scored 98, 203.

They nullified Oni's election, arguing that it failed to comply substantially with the Electoral Act and was riddled with criminal acts including violence and corrupt practices.

The dissenting judges disagreed with their colleagues on their decision in Ipoti as they nullified results of five units in Ward B of the area.

They called for the nullification of the rest, arguing that since more than half of the election results in the ward had been nullified, the rest could not stand.

Adebara, who read the minority judgment, also submitted that since the respondents could not produce the voters registers used in the four wards challenged in Ido/Osi, the results should be annulled. He said the tribunal was not convinced that the voters' registers and other electoral materials were burnt in the INEC office in Ido-Ekiti.

He argued that if the voters' registers were actually burnt as claimed, the INEC wouldn't have waited for four months before lodging complaint.

Blaming the police for their inability to prevent and arrest any culprit in respect of the burnt INEC office, Adebara described that as dereliction of duty. That also formed part of his conviction that the voters' registers and other electoral materials were not consumed by the inferno.

He, however, said: 'in absence of the voters' registers, we hereby nullified the purported results contained in the form EC8A.'

Exonerating the Deputy Speaker of the state House of Assembly, Saliu Adeoti, an AC member, of his alleged involved involvement in the burning of the INEC office, Adebara said Adeoti 'remained unshaken' while giving evidence before the court.

In his verdict, Adebara nullified some of the results based on among others, discrepancies in the date and number of votes cast, illegible writing on the carbonated copies of the form EC8A, signatures of party agents of some parties which did not feature any candidate in the election in Form EC8A.

Justice Adebara then declared Fayemi of AC as the winner of the election and ordered INEC to issue him a Certificate of Return.

Chief Tony Adeniyi, lead counsel to Fayemi, in his reaction prayed that 'the Lord God would reward you (judges) bountifully the way you have handled us.'

The lawyer said, 'one of the judgments was bungled while the other came naturally. We could see judges who were courageous and stood above board to decide the case the way it should be. We have been vindicated by the two judges, we will file our appeal which will be very, very soon.'

The state Chairman of AC, Chief Jide Awe said the Adebara group had given his party the leeway to be exploited at the appellate court.

PDP Chairman, Chief Bola Olu-Ojo described the judgment as fantastic, saying they would win at the appellate court if the petitioners appeal the court decision.