Eminent Nigerians to Buhari: The economy could run better 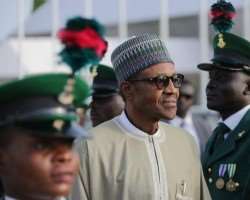 SOME eminent Nigerians and employers of labour have disagreed with Information Minister, Alhaji Lai Mohammed over President Muhammadu Buhari's economic policy. While the Information Minister said Wednesday that President Buhari's administration was on the right track and that there was no alternative to what it was doing economically, some eminent Nigerians disagreed, insisting that the economy could be run better.

Buhari Speaking at a meeting with members of staff of the Nigerian Embassy in Madrid, Spain, during his two-day official visit to the United Nations World Tourism Organisation, UNWTO, according to NAN, Mohammed said: “I believe that we are on the right track, there will be some pains, but there is no alternative to what we are doing.” He claimed that the administration had fulfilled its campaign promises to address insecurity, fix the economy and fight corruption. In the area of security, Mohammed said when President Buhari came on board, 14 of the 20 local government areas of Borno State, four in Adamawa and three in Yobe were under the sovereign authority of Boko Haram. He said the proactive measures and soft diplomacy with neighbouring African countries, the U.S., France and the G-8 had helped the country to “decisively deal with Boko Haram.”

“Today, all the major highways leading to Maiduguri are open and about two months ago, the Nigeria Football Federation, NFF, played a league match in Maiduguri stadium,” he said.

On the renewed agitations in the Niger-Delta and parts of the South-East, the minister reassured that the government would not marginalise any part of the country and assured that economic development would go round to everyone. He stressed that no amount of economic reforms put in place could work unless the monster of corruption was successfully dealt with. Mohammed said the administration's fight against corruption was not selective, and that the government was not probing the 2015 elections campaign funds of Peoples Democratic Party, PDP. Decrying the level of poverty in the country, Chief Ikokwu wondered the kind of economic policy that had been in place in the last 14 months. Ikokwu His words: “The nation is totally confused with regard to the economic policy. If there was clear economic policy, we won't be in recession. If the policy is market-oriented, instead of government-oriented, the private sector would have readjusted one year after the government took off, there would not have been maximum devaluation of the currency.

“It has been one year without an economic policy. Why should there be imbalance in the economy if there is economic policy? Full implementation of the budget is yet to begin. Economically, the nation is disillusioned and the complaints are everywhere.” Second Republic lawmaker, Dr. Junaid Mohammed, said President Buhari and Minister of Information, Lai Mohammed should stop deceiving Nigerians that this government had any economic policy. He said: “As far as I am concerned, President Buhari and Lai Mohammed are paying lip service to the economy by telling Nigerians they have a policy. Today, I cannot see anything and several Nigerians cannot see any policy in place. Dr Junaid Mohammed So, why should Nigerians support this so called policy that they do not know and why should they believe Buhari and Lai Mohammed?

“They talk about diversifying the economy but I can tell you that the same fertilizer I bought for N4,000  last year is now N9,000 this year. If this is what they call diversification, then they are talking nonsense. When there is no insecticide and no better harvest, what are they diversifying the economy to.“I am not persuaded by that lie by Lai Mohammed.”

Nigerians are sick and tired of excuses—Shettima To Alhaji Yerima Shettima, Nigerians are sick and tired of the excuses made by the federal government in fixing the nation's ailing economy. Yerima Shettima “This is part of the excuses we have seen from this government. After coming out to state that the previous government failed, the APC promised that it was coming to make things right, but to our surprise, the party is now coming out to tell us that it did not know the extent of the damage done by the past government.

“I must tell you that Nigerians have not had it this bad and this is worrying. When the Federal Government is saying there is no alternative, is it implying that this is a case of incompetence on the part of the government or lack of experience? I see this as an excuse.” “With the flexible foreign exchange market, some are doing a little better than the first half.  But, the problem still remains that supplies have not increased significantly. Of course, one should not expect the supplies to improve significantly over night. One advantage this current dispensation should have on this economy is significant inflow of foreign exchange sources other than the sale of our crude oil. I do know that those who are likely to make that happen will not take on the spot decisions. The tendency for them will still be to stand on the sideline and watch whether government will be consistent with its policy.

So, I really did not see an immediate solution to the issue of supply. But as we move towards the end of the year, we want to believe that the supply would improve. Because it is in the improvement of the supply that businesses will be able to have access to foreign exchange. Until that happens, one would continue to see a situation where the difficulties that businesses are going through will still continue towards the end of the year.”