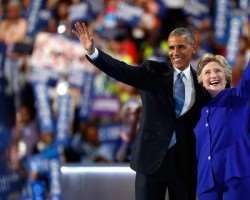 President Barack Obama made a fervent appeal for Hillary Clinton on Wednesday, casting the Democratic nominee as a custodian of his legacy while rejecting Republicans’ message as fostering anger and hate.

Obama said his former secretary of state is a better qualified candidate than even he or her husband, former President Bill Clinton.

“I can say with confidence there has never been a man or a woman — not me, not Bill, nobody — more qualified than Hillary Clinton to serve as president of the United States of America,” Obama said to a roaring crowd — and a belly-laughing Bill Clinton — at the Democratic National Convention.

“This is not your typical election,” Obama said at the Democratic National Convention in Philadelphia. “It’s not just a choice between parties or policies; the usual debates between left and right. This is a more fundamental choice — about who we are as a people, and whether we stay true to this great American experiment in self-government.”

Delivering point-by-point plaudits of Clinton’s record, Obama said the former top diplomat had the best view of what it takes to occupy the Oval Office.

“Nothing truly prepares you for the demands of the Oval Office,” Obama said. “You can read about it. You can study it. Until you’ve sat at that desk, you don’t know what it’s like to manage a global crisis, or send young people to war. But Hillary’s been in the room; she’s been part of those decisions.”

Her rival, meanwhile, is merely ginning up fear to secure votes, Obama argued.

“Donald Trump calls it ‘a divided crime scene’ that only he can fix,” Obama said of the Republican nominee’s descriptions of the state of the country. “He’s just offering slogans, and he’s offering fear. He’s betting that if he scares enough people, he might score just enough votes to win this election.”

“That is another bet that Donald Trump will lose,” Obama continued. “Because he’s selling the American people short. We are not a fragile or frightful people. Our power doesn’t come from some self-declared savior promising that he alone can restore order. We don’t look to be ruled.”

Obama said the message at last week’s GOP convention in Cleveland “wasn’t particularly Republican — and it sure wasn’t conservative.”

“What we heard was a deeply pessimistic vision of a country where we turn against each other, and turn away from the rest of the world,” Obama said. “There were no serious solutions to pressing problems — just the fanning of resentment, and blame, and anger, and hate.”

Speaking to what’s likely to be the largest remaining audience of his presidency, Obama recalled the moment 12 years ago to the day that thrust him onto the national stage. And he insisted the country was better off now than when he first entered office in 2009

“Through every victory and every setback, I’ve insisted that change is never easy, and never quick; that we wouldn’t meet all of our challenges in one term, or one presidency, or even in one lifetime,” Obama said. “So tonight, I’m here to tell you that, yes, we still have more work to do.”