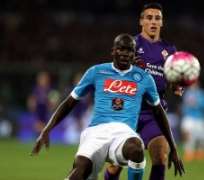 Chelsea have reportedly submitted a £38 million bid for Napoli centre-back Kalidou Koulibaly , as the Blues are keen to fend off competition for the Senegal international. Meanwhile, they reportedly face an Italian rival for another defensive target, Benfica ‘s Victor Lindelof .

Sky Italy (h/t SkySports .com ) confirmed Chelsea’s monster bid for Koulibaly : “The 25-year-old Senegal international is wanted by new Blues boss Antonio Conte to strengthen his defensive options, but Napoli are yet to respond to their offer.”

Napoli ‘s reticence to respond is only natural, since Koulibaly is a key figure at the back for the Serie A club. In fact, Italian newspaper La Repubblica  (h/t Tom Coast of Sport Witness) has indicated that Napoli president Aurelio De Laurentiis may prove “stubborn” when it comes to sanctioning any deal.

Chelsea have also faced pressure from fellow Premier League side Everton in their attempts to firm up any interest in Koulibaly , according to the Daily Mirror‘s Darren Lewis : “ Everton majority shareholder Farhad Moshiri —whose millions tempted manager Ronald Koeman away from Southampton this summer—has so far been prepared to match anything offered by the Londoners to land Senegal international Koulibaly .”

Yet it seems the Stamford Bridge club is determined to get their man. Making such a bold offer for Koulibaly makes sense considering Chelsea are now unlikely to have a clear path to Lindelof .

Italian source Calcio Mercato (h/t TalkSport ) revealed how Inter Milan “are ready to match any offer Chelsea put on the table” for the Sweden international.

Chelsea had reportedly told Benfica of their willingness to pay the £25 million release clause for the player who can operate “centrally, as a right-back or holding midfielder,” per Tony Banks of the Daily Express.

The links with both players show the kind of defender Conte is keen to recruit. Namely, he wants a physically intimidating centre-back.

FourFourTwo ‘s Tom Kundert  noted how the Benfica man is “tall and well-built, Lindelof is dominant in the air and uses his strength well to make crunching tackles, almost always well-timed.”

Who should Chelsea sign?
Conte clearly wants a powerhouse at the heart of his new-look defence. The Italian often likes to play three at the back and trusted Giorgio Chiellini to be his enforcer, both with former club Juventus and at international level, but he lacks a Chiellini type at Stamford Bridge.

Skipper John Terry is now 35, Kurt Zouma continues to nurse an injury and Gary Cahill is inconsistent, so Chelsea need a new brute-force talisman at the back. Sealing a deal for Koulibaly or Lindelof won’t be easy, but both players fit the bill perfectly.