Celestial Church seals off parish where nine-year-old was chained 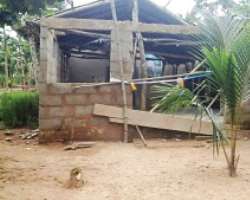 Fews days after the rescue of a nine-year-old boy, Korede Taiwo, from the Celestial Church of Christ (CCC), Key of Joy Parish, Wasinmi Ajibawo, in Ado Odo/Ota Local Council of Ogun State, the church has been sealed off by the highest hierarchy of the CCC, from Imeko area of the state.

The sealing of the parish was disclosed by the Baale of the community, Chief Saliu Ayinla Babayanju, when newsmen visited the community, saying that the land where the church is located, would immediately be seized by the community.

As at the time of the visit on Tuesday, the entire premises of the church, sitting on two plots of land, was deserted. The main entrance of the church was barricaded with bamboo leaves and white and blue velvet.

All the church members, especially those seeking spiritual help, had deserted the place, as there was nobody in sight. But for three officials of the Nigerian Security and Civil Defence Corps (NSCDC), who came on a motorcycle, but left hurriedly, the entire area has become desolate.

However, Korede, who was chained for a month by his biological father, Francis Taiwo, for stealing his money, yesterday pleaded with the wife of Ogun State governor, Mrs. Olufunso Amosun, not to allow anybody return him to his father for whatever reason.

Frail looking Taiwo is now on admission at the Federal Medical Centre (FMC), Idi-Aba, Abeokuta, for thorough medical attention. He made the plea when Mrs. Amosun paid him a visit at his hospital bed on Tuesday.

Korede, who spoke in Yoruba at the Children's Ward, said he was not convinced that his father would not do a worse thing to him if he is put in his custody.

He could barely speak above whispers due to exhaustion and starvation by his father and stepmother, as Mrs. Amosun strained her ears to hear him.

Amosun's wife was accompanied to the hospital by the Attorney-General and Commissioner for Justice, Dr. Olumide Ayeni, the Commissioner for Education, Science and Technology, Mrs Modupe Mujota, Commissioner for Health, Dr. Babatunde Ipaye, and officials of the Women Affairs and Social Development.

Mujota revealed that the first family in Ogun, Governor Ibikunle Amosun and his wife, Olufunso, have adopted the boy, adding that “all efforts will be made to ensure that Korede excels in life.”

“It is reassuring the boy is doing well despite all what he was subjected to. We were worried that we will see a dejected and withdrawn child, but we are seeing Korede that is active with his mind alert. Although, he looks smaller than what a child of his age should be, he is recuperating very fast,” she said.