It's illegal to pay ex-governors as senators – Falana 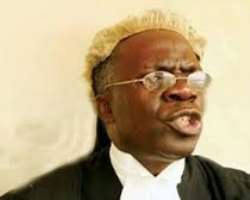 Activist-lawyer Femi Falana on Tuesday said that it remained illegal to pay salaries to for former governors who currently serve as lawmakers in the National Assembly.

He also said that the 109 senators and 360 members of the House of Representatives should refund the salaries they got for services not rendered.

Falana, a Senior Advocate of Nigeria (SAN), said it was illegal for former governors, who have been placed on life pension in their states, to earn salaries and allowances in the National Assembly.

He also stated that the lawmakers ought not to have been entitled to the payment of their full salaries and allowances for failing to sit for the mandatory 181 days before going on a seven-month recess.

The Lagos lawyer, in a lecture he yesterday delivered as the investiture of Mr. Dele Ojogbede as President of Rotary Club, Ikoyi in Lagos, counselled the Federal Government on what to do with those undermining the anti-corruption war.

He also commented on the allegations of corruption against the Chief of Army Staff (COAS), Gen. Tukur Buratai, Internal Affairs Minister Abdulrahman Dambazzau and Comptroller-General of Prisons Ahmed Jafaru, as well as the alleged budget padding in the Greeen Chamber.

According to the lawyer, none of the 469 lawmakers in the National Assembly had justification for the emoluments they collected in the first legislative year under the President Muhammadu Buhari administration.

His words: 'The APC-led National Assembly has also engaged in collecting jumbo emoluments for services not rendered to the nation.

'Whereas Section 63 of the Constitution provides that the Senate and the House of Representatives shall each sit for not less than 181 days in a year, Section 68 thereof states that any legislator who fails to attend the proceedings of the Senate for less than one third of the required number of days shall automatically lose his or her seat.

'For the first legislative year which ended on June 9, the Seventh session of the National Assembly did not meet the constitutional requirement. Specifically, due to incessant recesses, the House of Representatives sat for only 104 days while the Senate sat for 96 days. This means that the Senate sat for barely 50 per cent of the required sitting period.

'Indeed, some of the senators who had to attend criminal courts where they are standing trial for corrupt practices did not seat for up to 70 days throughout the legislative year.

The Senate was actually shut down on a number of occasions to enable the Senate President, Dr. Bukola Saraki to attend the proceedings of the Code of Conduct Tribunal (CCT) where he is standing trial for false declaration of assets. And in solidarity with him, a number of senators abandoned their duties to accompany him to the tribunal.

'Since the labour policy of 'no work no pay' is applicable to all public officers the legislators ought not to have been paid when they did not perform any legislative duty.

'In other words, having failed to sit for the mandatory period of 181 days the legislators were not entitled to payment of full salaries and allowances for the whole legislative year.

'Having been paid full emoluments when they failed to sit for the required number of days, the legislators ought to refund some money to the treasury.

'In the circumstance, the Accountant-General of the Federation should ensure that the legislators are made to refund the money collected for the number of days they failed to sit in the National Assembly.'

He urged the anti-corruptions agencies to investigate and ascertain how COAS Buratia came about the $1.5 billion property he claimed to have disclosed in his asset declaration form.

'Aside the statement, the CCB should proceed to investigate and confirm that the properties were legitimately acquired from the income of the general.  This investigation should be speedily and transparently conducted to assure Nigerians that there are no sacred cows in the prosecution of the war against corruption', Falana said.

He recommended that the dismissal dose given to two judges for age falsification should be served on the prisons' chief, who has not denied allegations that he doctored his age.

Falana said: 'Since two judges were recently dismissed for reducing their ages and ordered to refund the money they had illegally collected the Comptroller-General of prisons ought to be removed from office without any further delay.'

The senior advocate said those involved in the 2016 Budget padding should be dismissed from service and handed over to anti-corruption agencies for prosecution.

He said the budget padding row rocking the leadership of the House of Representatives should not be allowed to be treated as the lower chamber's internal affair but be investigated and offenders sanctioned. - The Nation.