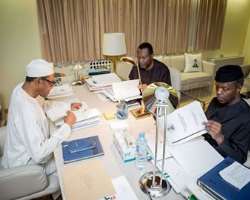 The federal government recorded a revenue shortfall of N1.064 trillion in the first six months of the year, the Minister of Budget and National Planning, Senator Udoma Udo Udoma, disclosed on Monday.

The disclosure came as consultations for the 2017-2019 Medium Term Expenditure Framework(MTEF) and Fiscal Strategy Paper (FSP) commenced in Abuja.

According to him, the shortfall was augmented by domestic borrowing amounting to N 600 billion, about 33 per cent of the approved borrowing of N 1, 818.87 billion.

He attributed the negative revenue situation on falling oil revenue and attacks on oil and gas installations in the Niger Delta region.

'The 2016 budget performance is reflective of the low revenue out turns attributable to the global and domestic developments earlier highlighted.

'Oil revenues fell significantly in the second quarter compared to the first quarter as a result of increased oil pipeline vandalism and production shut-ins.

'Non - oil revenues also declined compared with forecasts in the budget due to slow- down in economic activities and the acute shortage of foreign exchange,' Udoma said.

Giving an insight into the current expenditure situation for the year, he disclosed that N2.123 trillion had been spent by the federal government

Total capital expenditure as at the end of June, according to the minister, stood at N331.58 billion, while personnel cost had been fully met.

He put personnel cost at N891.31 billion even as he stated that debt service gulped N598.63 billion while statutory transfers was N175.68 billion.

On overhead, Udoma disclosed that the figure was N125.4 billion just as pension and gratuity got N79. 18 billion.

'Government's focus is to ensure quality of expenditure. Capital releases are based on priorities. MDAs's performance, as well as, value-addition to the immediate needs of the economy,' the minister said about the administration's policy on capital expenditure.

On plans for revenue projections in the coming years, the minister said the administration was considering a conservative oil price benchmark of $42.5 barrels per day (bpd) for 2017, $45 bpd in 2018 and $50 bpd in 2019.

Similarly, he said on the Gross Domestic Product (GDP) that the government was projecting a gradual recovery after the slowdown, adding that a very marginal positive growth of 0.35 per cent was being expected in 2016 ,with a projection of increase in that direction to 4.4 per cent in 2019.

According to him, this was with an average of 3.77 per cent average within the period of the MTEF.

'GDP growth is expected to be largely driven by the non-oil sector with agriculture including agro-business, solid minerals, as well as, building and housing playing a lead role . Export-led growth is to be pursued,' Sen. Udoma said.