GOODLUCK JONATHAN: THE 'AYES' HAVE IT 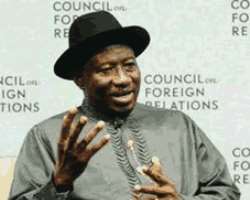 Very soon the floodgates of political campaigns will be flung open. Already, political observers and indeed all Nigerian have been inundated with a roll call of those jostling for the leadership of this great Nation.

Already, some politicians mostly from the Northern part of this country have been consulting extensively on their intention to run for the exalted office. This is quite expected given the controversial pronouncements of the National chairman of the People's Democratic Party (P.D.P) prince Vincent Ogbulafor that the party has zoned the presidency to the North.

According to him the idea behind the decision is to ensure that the North gets a complete two term tenure as was the case with the south under former president Olusegun Obasanjo.

In other climes, what a party chairman says will not attract much discourse except within the party. Most party stalwarts and in fact most discerning observers have agreed and rightly so that the zoning formula does not guarantee a second term to any zone (of the sitting president). What If the incumbent choses not to go for a second term, Is incapacitated as in the current case with president Yar'Adua, or is dead. What of a sitting president who is manifestly not performing, must such a person be foisted on the country for a second term? I don't believe that was the intention of the founding leaders in enshrining the zoning policy. In fact in many of our states, this is already the established position nay Anambra, Ogun, Ekiti etc.where incumbent governors did one term, they were not replaced by fresh governors from their zone.Anambra is of particular interest because when Dr. Mbadinuju then P.D.P governor was not given a second term by the P.D.P, the same P.D.P chose Dr. Ngige who is from a different zone. If the zone was guaranteed an eight year term the P.D.P should have gone to the same zone to produce a governor but it looked outside that zone in the spirit of rotation.

Interestingly, also the P.D.P zoning arrangement did not foreclose aspirants from other zones from taking a shot at the exalted office in 2003 .We were all witnesses to the drama in 2003 when then president Olusegun Obasanjo was seeking for a second term in office, there was no issue of the office been permanently in the South for eight years ,hence both Alhaji Atiku Abubakar the then vice president and indeed aspirants like Chief Banabas Gemede and Alhaji Abubakar Rimi (of blessed memory ) all attempted to seek the nomination of the P.D.P.with Atiku withdrawing on the convention eve while Rimi and Gemede actually contested but lost at the convention. These are all very recent history.

Had any of them succeeded in snatching the party's ticket, Obasanjo's second term bid would have been thwarted. The south would not have seen it as a zonal issue as the zone had already fulfilled its turn, in fact the attempt to remove then president Obasanjo in 2003 was spear headed by such southern governors as Ibori, Kalu, Alamesiegha etc and they never clamored that the president must stay back in the south as it is a known fact that most of them preferred the then vice president Atiku Abubakar who is a Northerner.

More over, had president Obasanjo in any form been incapacitated say in 2002 with Vice president Atiku as acting president there would have been no debate whatsoever as to whether or not Atiku would run in 2003.It would just have been taken for granted.

There are also those who postulate that if Dr Jonathan runs, that, the North will feel embittered, Haba, why should this be? Is the North not an integral part of Nigeria, are the southerners' inferior partners in the Nigerian arrangement, particularly, is the old South East an inferior partner on a Nigeria every body knew was founded on a tripod. The North has ruled this country for thirty eight years out of it's fifty years of independence, the West for eleven and half years, with the old South East having only six months. Why is the old South East not embittered and why should any fair minded person complain that a person of the South East origin is seeking the exalted office. In fact if Nigerians are indeed fair minded, there will be an outright concession by others to aspirants from the old South East.

The acting president Dr. Goodluck Jonathan who was the Vice president to Alhaji Umaru Yar'Adua before his health problems became a major issue, has continued to give a good account of their joint mandate ( i.e. Yar Adua /Jonathan mandate ) for all intent and purposes ,therefore, Yar Adua is invariably fulfilling his zone's mandate albeit by proxy as provided for in the constitution. Unfortunately, this is no fault of any one.

The above axiomatic position having been established, therefore, guarantees that any worthy son of the South could give a shot at the presidency, as did Gemade and the late Rimi in 2003.As it stands no other Southerner is in a better position than the acting president Dr Goodluck Jonathan to give it a go. Besides the fact that he has the fundamental right like any other Nigerian to actualize his political ambition. within the period he has been acting, Dr Jonathan has proved that he has what it takes to drive the country forward. As a leader with youthful energy he has started charting a path of greatness for Nigeria. In this post Obama era, the world is looking for such rare qualities as youthfulness, credibility, experience, sound intellectual base, competence and courage. These are veritable qualities that our acting president seem to posses which has so far been endearing him to a majority of the Nigerian public.

Internationally also Dr. Jonathan enjoys a lot of goodwill from world leaders. Three months ago President Goerge W. Bush junior of the United States of America and Britains Tony Blair paid him a solidarity visit. Again only a few days ago, Dr Jonathan visited president Barracks Obama of the United States of America where he equally met with Vice president Joe Biden and other congressional caucus leaders. Nigerians will soon begin to reap the full benefits of the visit and the acting president's international Goodwill. This appears to be the kind of leader the nation needs at this critical period.

Over and above all these is also the fact that Dr Jonathan comes from the oil rich Niger Delta, the Goose that has been laying the Nations golden eggs for so long. The recent menace of militants in the Niger Delta has been generally acknowledged as a direct response to the wicked marginalization of the region by the Nigerian Nation. It has therefore become quite imperative for a person from that region to lead this country to help assuage the bitterness felt by the people of that region which has given rise to the ugly situation of militancy. Again no Niger Delta person is in a better position now than Acting President Goodluck Ebele Jonathan.

In all, the tides, generally favour the man and the Nigerian Nation has nothing to lose and much to gain if Acting President Jonathan is given the necessary support to be elected. Finally, remember the name is Goodluck. Why don't we as a nation try this 'Goodluck '.As they say there is much in a name especially this name.