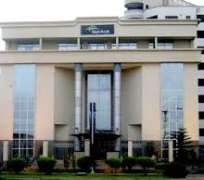 Central Bank of Nigeria (CBN), has affirmed its confidence in Skye Bank Plc and has provided a short-term loan to the Bank to help to stabilise its operations after it replaced top executives for failing to meet minimum capital requirements.

A statement by Isaac Okoroafor, the CBN spokesman, stated that the undisclosed guarantee sum would assist the bank to shore up its liquidity and maintain its level of operations.

“The short-term lending facility will allow the management of the bank to ensure that some withdrawals it suffered in the wake of the undue panic of last week do not adversely affect its operations”, Okoroafor said.

In addition, “the CBN issued guarantees to depositors and creditors of Skye Bank as a demonstration of the bank's health”, Okoroafor further explained.

Nigeria's central bank has powers to remove bank executives and used them during the 2008/2009 global financial crisis when it sacked nine CEOs at banks which were undercapitalised.

Skye became one of the country's systemically important banks according to the central bank after it bought Mainstreet Bank in 2014 requiring it to hold more capital.

The central bank has said Skye is able to meet its obligations and that it will provide support until the new management can bring in fresh funds.