FG moves to quell concerns about Nigeria sliding into recession 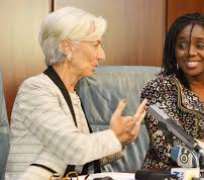 Nigeria will face only a short recession if Africa’s biggest economy contracts again in the second quarter as the removal of fuel subsidies and policies to lower dependency on oil will pay off, Finance Minister Kemi Adeosun said on Thursday.

On Tuesday, the International Monetary Fund said Nigeria’s economy is likely to contract by 1.8 percent this year due to a slump in oil prices and a shortage of hard currency.

Gross domestic product contracted by 0.36 percent in the first quarter of the year and the central bank’s governor has said a recession appears to be imminent. GDP data for the second quarter is expected in August.

“I think if we are in recession, what I will like to say is that we are going to come out of it and it is going to be a short one,” Adeosun told reporters after briefing the Senate on the economy. “I don’t think we should panic,” she said in the first government reaction to the IMF forecast.

Adeosun said government measures such as the lifting of fuel subsidies and boosting of non-oil production would give the economy a fillip. “Agriculture output seems to be up,” she said.

“We were subsidising around 45 million litres of fuel per day,” she said. “These are real savings to the economy which we are now redirecting into the essential infrastructure that will keep the economy going.”

In June, the central bank removed the naira’s peg to the dollar to ease dollar shortages but liquidity remains thin and the currency dropped to a new low on Thursday.