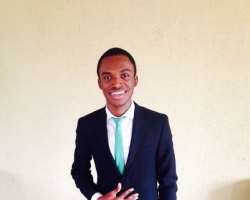 ABOH JOSEPH is the newly elected President of NACOSS (the National Association of Computer Science Students, Crawford University Chapter). In this interview with ADEOYE DANIEL (300 Level, Political Science and International Relations), he discusses his planned objectives and goals for the new academic session. He also has a message for the executive members of his administration)

Q. Kindly introduce yourself?
My name is Aboh Joseph, I am from Ogoja in Cross River state but I am domiciled in Rivers state.

Q. You were recently elected as NACOSS’s new President. You must have been feeling yourself since then, Right?

Well, it is a very good thing for me. All through my life, I have been in one leadership position or the other. Thus I feel it is a platform for me to be able to express my leadership skills and you know… take the department forward.

Q. What are your set aims/objectives and goals for NACOSS as an Association?

Before I came on board and even before I got admitted. There have been effective communication issues between the NACOSS executives and the member-students of each level. So definitely, Intra-Association Communication is an area of challenge which I would look into and try to ameliorate.

Also, I intend to make NACOSS recognized in the south west region of Nigeria. This would be achieved through Seminars, Competitions, etc which we would participate in either as Hosts or as Invited Participants.

What I want to achieve might not be very much but I want to bank on the fact that I am capable of doing certain things and that these could be actualized. I don’t want to emulate the usual trend of empty promised by leaders like what we have in our country’s political system. I would have a major commitment to the key areas of concern which shall be duly elucidated as soon as the new session starts.

Good question! The major thing is to get everybody involved in the whole creative process. This is because people would support what they create so if I get everybody to support what we collectively create, then information will flow.

Of course, every department has a WHATSAP group through which they disseminate information amongst themselves. NACOSS would continue to utilize that system and it surely would be a means of effective communication amongst the members across all levels.

Also, I would have an executive who is in charge of information dissemination. That would be the Public Relations Officer, who is going to be in charge and he would be responsible for the flow of information across all levels. He should be effective and capable of this duty, failure of which would be tantamount to his removal.

“In the same vein, for my administration, all the executives of the association should and must be up to their respective tasks. Every executive shall be held responsible and accountable to the office that he holds in the department. I will introduce a system of monthly reports through which the performances of individual executives shall be assessed and analyzed. Through this, Non-functional members shall be sanctioned appropriately.”

Q. Good to know that you have laid-out plans already. Now, as concerns academic improvement (of the students), what are your plans towards achieving that for your Association members?

See…Academic Success is a choice based on individuality! Nobody would tell you that he failed because he didn’t get a mentor or a special teacher. He failed because of his CHOICE! Truthfully, it is going to be difficult to ensure that everybody is high flying in their academics. However, since our discipline is a professional based one, I have made arrangements to meet the H.O.D to organize certification classes for the students intermittently and therein integrate these classes into our syllabuses. This way, students would attend, participate and get certificates at the end.

Q. With respect to the social aspect of NACOSS as a department and NACOSSites as individuals, what are your plans for it to improve?

It may interest you to know that the Association has Social Directors who are up to the tasks in Persons of Ajenifuja Lanre and Uzoigwe Favour. I believe they would carry out their duties very well. You know Social gatherings are usually organized during departmental weeks. Well, we should be looking at organizing social gatherings at other times of the session, not only during the week. Although, everything is money-driven!

Furthermore, I am working on organizing a periodic GAMES DAY (maybe every last Saturday of the month) for all NACOSSites. It would encapsulate both indoor and outdoor games, relay races and other types of Games. It would be a form of social interaction amongst all members across all levels. This would definitely improve the social life of NACOSS and NACOSSites in totality.

Q. Oh! That would be a really great achievement if you can pull it through! You were a key member of NACOSS football team that won the Crawford Interdepartmental Football Cup last session. You obviously must have felt good. Can you tell us more about it?

How else would I feel??
*Chuckles*
I felt so good and happy. We played against GEMSSA whom we have never defeated in the history of Crawford University and since the beginning of this Games Cup. I was really elated and thrilled to have been a key player in the win. We haven’t won the Cup before so our first time winning it……..C’mon, I am BLESSED. A leader must lead by example and I have shown it that I am a leader by wining NACOSS’s first ever Departmental Cup. So, to all NACOSSites, Go out and WIN!

Q. So, your current academic stance, how is it faring with the extra work of being a President and also, being a member of the Students Representative Council (S.R.C.)?

Academics and Responsibilities!! It is never going to be an issue of concern to me. I am not affected at all. I believe that if you are to lead, then you must lead in all areas. Therefore as a leader, I am expected to be high-ranking in my academics. So by God’s grace, my academic stride is on a high level…..You know what I mean right? And I am working to ensure that I balance it up with my desired CGPA.

Q. Can you shed more insight on the personality, ABOH JOSEPH?

Well….talking about life generally. I am open, very open a person; going by the notion of “Every Man should allow himself no indulgence in secret that would undermine his intelligence nor mar his public witness”. I am very jovial and talk to people a lot. I believe that life generally is a risk that is worth taking. I like open and honest people!

Although people have different opinions about people, so I am sure that there would be differing views by people on who I am. One thing that I have learnt in life is that if you don’t want to be criticized, then do nothing, say nothing and be nothing in life. Just Be Docile! Therefore, criticism would not and has never been a problem for me, so I live with it as it comes because I see Criticism as a True Leader’s test of Maturity.

Q. On a final note tell us; Joseph Aboh in the next 10 years? What should be expected?

Well, All through my childhood, I have always wanted to be a pilot. Hence, the name Captain Joe became my nick. So in the next ten years, I should be rocking the air waves.