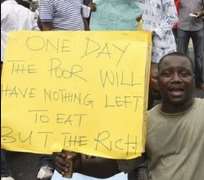 Boko Haram fanatics in the North, militants blowing up oil installations in the South-East, lawless marauding Fulani herdsmen, cultists killing each other in broad daylight, murderers, fraudsters and kidnappers – what do they all have in common or what is the common denominator?

Poverty!
The World Bank describes the poverty trap as a spiralling mechanism which forces people to remain poor, forever, with no means of escape.

People caught up in the poverty trap are most likely to turn to mischief to either supplement their income or as a means to escape their predicament.

Youths in the North have little or nothing to do. Their land is infertile. There are no factories or offices for them to work in; not enough institutions of higher learning for them to learn a skill. They have no future. Nothing. So they are young with nothing to do and become susceptible to recruitment by militant hate preachers who can easily brainwash their idle minds. For being an Islamic fighter with a quasi-Islamic organisation called ‘Boko Haram’ they offer salaries paid in dollars and they get to keep the spoils of war. Most of the time they join up to starve of death of boredom or frustration – what’s more is they are promised a place in Paradise for killing a few infidels, kuffars. So why not?

In the Delta region of Nigeria, one of the most neglected places in the country, people have nothing to do either – there’s no work. After many years of oil exploration in the region the waters are polluted so they can’t fish or even farm. And all the while the unemployed youths of this area can see the wealth creamed off their lands with nothing being invested back. Though it’s not an excuse ,people wonder why they resort to blowing up oil installations and kidnapping oil workers- they have nothing and probably never will as they become trapped in the poverty trap that’s engulfed their lives. It will make them reckless, daring and prone to commit countless criminal activities.

Also in certain parts of the country young cultists have taken over the streets killing each other at random in the battle for supremacy of the neighbourhoods – why not? Most of them are highly educated, they have no jobs, no money and they take their frustration out on each other – what have they got to lose?

Again we’ve got the illiterate Fulani herdsmen with their own brand of terror. As poverty stricken as they are everything they have in this world is tied up in their scrawny herd they drive south when the rains don’t fall in the North. Being nomads nobody has thought to offer them some sort of education or at least educate them about the laws of the land, namely you can’t go driving your herd where you want to without repercussions. The poverty trap has excluded them from even the day-to- day workings of this century, things we often take for granted, which would explain why they act like Neanderthals and go on the rampage occasionally.

A poor man in the poverty trap is a very angry man – he’s got nothing and will never have anything – and all around him he can see people, mostly corrupt politicians, living a life in can’t even in his wildest dreams. As a resort a new breed of person is created.

It’s very easy for anybody to criticize, condemn or alienate. Very easy for us to play judge, jury and executioner. But unless you’re in the shoes of the aforementioned you will never know in your wildest nightmares what it is like to live their lives. What it’s like to feel worthless and unappreciated and looked down upon as the dregs of society, having no positive thoughts of a future or much to live for. Sometimes we should thank God or Allah, a bit more often, for our good fortune instead about moaning about what we don’t have – spare a thought for the poverty-stricken who have next to nothing and have to live like that and may never find a way out of their condition.

Why ?
The current economic situation in the country has doomed these people to a life of desperation. Where each day is lived day-by-day and out of desperation they will do anything – steal, kill, prostitute themselves out or allow themselves to be manipulated by people with evil intent.

When you have a country, like Nigeria, where more than half of the population live below the poverty line, you have a problem. As its inevitable the crime rate will go up, mortality rates will rise as the life expectancy is reduced(- the current life expectancy in Nigeria is 54.5 years), GDP will drop as a result of so many people being out of work and the government will have to spend more money policing the end creations of the poverty trap.

The total elimination of a poverty trap, in any nation, is virtually impossible but steps can be taken to greatly reduce it. Employment is a key factor here.

Get people into employment (- and pay them on time!) and the first hurdle is crossed. Employment can guarantee the least privileged of soceity the opportunity to put a roof above their heads, three square meals a day and spare money in their pockets. This will take people off the streets and away from the temptation to get up to any mischief. But yet again the employment needs to be permanent to offer the individual a sense of belonging and a future. Unfortunately in Naija no condition is permanent and places of work open and close all the time offering workers no condition of long term employment or job security.

There needs to be substantial Federal Government investment in what I’ll call ‘flashpoint zones’ – areas in which mass unrest can erupt at a minutes notice without even the slightest provocation – these are currently large areas of the barren North and the Delta Region. People without anything to do are potential troublemakers. And government investment shouldn’t just be limited to building a few schools and hospitals but to include places where actual skills can be learnt like the old modern schools, places to work and places to unwind later such as sport centres, social clubs and libraries. This way they have a place to learn, work and congregate instead of milling around street corners or waiting to be indoctrinated by gangs or warped religious goons.

Incentives, such as tax-breaks, should be given to investors and companies willing to invest and build-up businesses in deprived areas. A new factory opening up in a deprived town can turn its fortunes around in a matter of just a few years.

With the current Naija poverty trap going on unchecked as it is we can hardly be surprised when the end results come back to haunt us as juvenile delinquents, hoodlums and other undesirables.

We don’t! When we know all our problems will be solved.

Disclaimer: "The views/contents expressed in this article are the sole responsibility of Tony Ogunlowo and do not necessarily reflect those of The Nigerian Voice. The Nigerian Voice will not be responsible or liable for any inaccurate or incorrect statements contained in this article."
Articles by Tony Ogunlowo
6-9-2017  When Churches’ Become Fetish Ritual Dens26-6-2017  Let’s Break-up Nigeria!1-5-2017  The Growing Problem Of Untreated Dementia In Our Elders21-4-2017  The Senator Dino Melaye Circus12-4-2017  The Art Of Showing Off: How Celebrities With Low Self-image Ridicule Themselves OnlineMore...