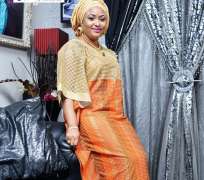 THE wife of Kogi State governor, Mrs. Rashida Bello, has called for co-operation of the people in the state to allow the governor, Yahaya Bello, succeed in fulfilling his campaign promises to the people, urging all to embrace peace.

‎
She said the governor would not only succeed in fulfilling his campaign promises to the people, but would as well go extra miles in taking the state, which had suffered a lot of setbacks, to a greater height.

‎
A statement by her Media Assistant, Mrs Olamide Adesoro said Mrs Bello, who solicited for co-operation for the emergence of a "New Direction" where peace, ‎and development will strive, said the state belongs to all irrespective of religious, political or ethnic differences.

‎‎
The wife of the governor, made this passionate appeal yesterday while discussing with members of the ‎National Council of Women’s Societies of Nigeria o‎n how to improve the lives of the women and the youths in the state, said relevant plans have been mapped out by her NGO (Kogi Women and Youth Empowerment Foundation) to assist in training the people, especially women and youths on various skills acquisition.

‎“My NGO is to train people in different skills acquisition programmes with the sole aim of empowering the people to make them become self-sufficient and employers of labour,‎" Mrs Bello said.‎