Victor Umeh: A Dogged Fighter At 54 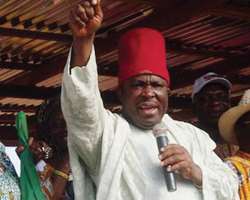 Former national chairman of All Progressives Grand Alliance (APGA), Chief Victor Umeh, will be 54 years old on Tuesday, July 19, 2016. Umeh, an estate surveyor by profession is an astute politician that can be said to have made significant impacts in the sustenance of Nigeria’s democracy.

Widely known for his philanthropic initiatives, the benevolent politician with sundry traditional titles for his enormous contributions towards the advancement of the course of humanity, started his voyage in politics in 1998 as a founding member of the Peoples Democratic Party (PDP), before joining forces with other progressive minds to form APGA in 2002.

As APGA national chairman for over a decade, Umeh, an unwavering fighter and warrior, recorded great landmark achievements, winning several political and legal battles for his party. For three years between 2003 and 2006, Umeh, a consistent, loyal and dependable politician, stood solidly behind former Governor of Anambra State, Peter Obi to regain the stolen mandate of APGA from the then Governor Chris Ngige of PDP. His role in the case instituted for the reversal of the purported impeachment of Obi soon after he assumed office by the then PDP-controlled Anambra House of Assembly on November 2, 2006 and the celebrated tenure interpretation suit in 2007 was quite momentous, such that he was hailed by Obi himself.

A successful estate surveyor turned politician, Umeh was seen by his admirers as the most vocal, vibrant and outspoken party national chairman in the country during his time. The late Ikemba Nnewi and great leader of APGA, Dim Chukwuemeka Odumegwu Ojukwu admired him so much that he could not hide his feelings about the stuff Umeh is made of after the triumphant outing in the polls that brought in Obi for a second term as Governor of Anambra State in 2010. That was the first time such was happening in the history of Anambra politics. Ojukwu, the highly respected Igbo leader, in a congratulatory message in the Daily Sun of March 17, 2010 described Umeh in glowing terms saying: “The might of a warrior is tested only in battle. On this historic occasion of the inauguration of Governor Peter Obi for a record second term of office, I salute your tenacity, your courage and resilience, APGA has always known what has now become widely acknowledged… kudos.”

Umeh’s indefatigable spirit was likewise seen in the protracted leadership crisis of APGA. He doggedly fought and won Chekwas Okorie, the ousted founding national chairman in various suits up to Supreme Court to remain the authentic national chairman of APGA. Okorie was left with no choice than to go and form a new party after Umeh knocked him out at the apex court on March 25, 2011.

While Umeh was still basking in the euphoria of his triumph from the over six-year legal wrangle with Okorie, Obi, for reasons only known to him, decided to open another round of leadership tussle by pitching tent with a clique in APGA to send him packing. That led to the emergence of Barrister Maxi Okwu as a factional national chairman of the party.

Nonetheless, the Ohamadike Ndigbo recently conferred with an honorary doctorate degree by Tansian University, Umumya, Anambra State, in his usual approach, rose up to the challenge and wrestle Obi even as the seating governor. The Court of Appeal on July 15, 2013 ruled in Umeh’s favour in one of the different cases instituted to kick him out by the Maxi Okwu-led faction with the full backing of Obi. All other such cases equally went in favour of Umeh up to the Supreme Court.

After the Appellate Court ruling in 2013, Obi, seeing the danger ahead and realizing that the Umeh’s factor was key to the victory of APGA and his anointed candidate in that year’s governorship election in the state, he had to quickly mend fences with the Dike Anagbaluizu of Abagana and the Ikenga of Oba. Despite Okwu’s refusal to be part of the reconciliation and his insistence to continue with the court cases as factional national chairman, the timely reunion Obi had with Umeh saw APGA emerging victorious in the 2013 Anambra guber election that produced the incumbent Governor Willie Obiano. The outcome of that election was obviously a further indication that the erstwhile APGA helmsman is undoubtedly a strong force to reckon with in the political firmament of Anambra State.

Speaking on the stupendous feats of Umeh as APGA boss, the man who took over from him last year, Dr. Victor Oye, had confessed that the shoes of his predecessor were seen as too large for whoever would succeed him. Ifeanyi Afuba in a piece quoted Oye as saying in an interview with Daily Sun, “Three things could account for the success of the party in the 43 court cases. First was the uncommon love of God for the party. The second was the flimsiness of the reasons…for the cases. And the third was the indomitable fighting spirit of Chief Victor Umeh. He was everywhere galvanizing support for the legal team. His elephantine memory and capacity for details singled him out during the trying moments.”

When Umeh succumbed to pressure from his people to contest the Anambra Central senatorial election in 2015, most political watchers predicted his victory because his records speak volume. He was the most formidable candidate. His campaign was the most robust and elaborate in style with a strong support base from within and outside Anambra State. Various groups, communities and individuals across the Southeast were lining up to endorse him as the candidate to beat. They believed he was fully equipped to represent not just the Anambra Central people but also serve as a powerful voice for Ndigbo in the Senate.

However, the 2015 general election came and the PDP candidate, Mrs. Uche Ekwunife was announced winner of the Anambra Central poll by the Independent National Electoral Commission, INEC. Convinced that the election was manipulated to favour the PDP candidate, the peace-loving politician, who appears to have unalloyed faith in the judiciary, gathered his evidence and headed straight to the tribunal to seek for justice.

When the tribunal dismissed his case, he did not give up. Instead, he graciously and quietly moved to the Court of Appeal which is the last stage for National Assembly election matters. The 1984 graduate from the University of Nigeria, Nsukka, UNN, and Principal Consultant of V. C. Umeh & Co, a firm of estate surveyors and valuers, succeeded in getting the Appeal Court to nullify Ekwunife’s election in December, 2015. The appellate court consequently ordered a rerun and barred Ekwunife and the PDP from taking part.

While INEC was about to conduct the rerun on March 5, 2016 and Umeh set to clinch victory and take his seat in the Red Chamber, an Abuja High Court ruling came, compelling the electoral body to include PDP in the exercise. Confident that its decision to exclude PDP was guided by law, based on previous Supreme Court verdicts, INEC postponed the rerun indefinitely and appealed the said High Court ruling. Umeh who strongly believe the electoral umpire was right, asked to be joined in the appeal as an interested party.

The scenario has caused another battle line to be drawn between Umeh and Obi. The former Anambra governor, now a PDP member was not a candidate in the annulled election, but wants to wangle his way into the rerun contest all in a bid to stop the ex-APGA chairman. Hence, he (Obi) allegedly instigated the suit delaying Umeh’s smooth ride to the Senate and denying the good people of Anambra Central representation at the highest level of the country’s legislature.

Supporters of Umeh, a native of Aguluzuigbo, believed to have lived a greatly fulfilled life at 54 are quite optimistic that he would be in the Senate, no matter the tactics and gimmicks employed by his political opponents to frustrate the conduct of the rerun. According to them, no man can change whatever God has destined!

At 54, his people find in him the doggedness, ebullience, dynamism and fitness required to represent them well. He demonstrated these attributes much in the 2014 national conference, where he stood to be counted among those that championed the cause of the Igbo nation.

Umeh, a fellow of many national and international professional institutes, whose education foundation has granted scholarships to many indigent students in both secondary and tertiary institutions, was APGA’s pioneer National Vice Chairman, South East and later National Treasurer prior to his emergence as the National Chairman in 2004. He was also elected State Treasurer of PDP in Anambra State before his resignation from the party in 2001. He has numerous awards and honours in his kitty, including the national honour of Officer of the Federal Republic, OFR.

I wish him more years of good health and fruitful contributions to the growth and development of our dear country, as he continues with his political pursuit at 54.