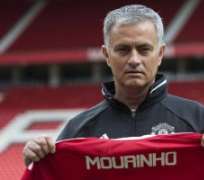 It is almost as if Manchester United manager Jose Mourinho has watched and learned from the painfully obvious mistakes his two predecessors at Old Trafford made in the transfer market.

In the summer of 2013, David Moyes , simply grateful to have been given the job, allowed the club to drift through the summer months without purchasing a single player until he managed to grab Marouane  Fellaini from Everton on the last day of that transfer window for £4 million more than his recently expired, £23.5 million release clause.

That entire summer was a farce for United, and Moyes never recovered. His failure to adequately bolster his squad was one of the main reasons his six-year contract lasted less than 10 months.

Louis van Gaal  succeeded Moyes in 2014, but preoccupied by guiding the Netherlands to the World Cup semi-final in Brazil, the Dutchman repeated the same mistakes. Though he managed to sign more players, he failed to do it early enough.

On the opening day of the 2014-15 Premier League season, United began the Van Gaal era with just one new signing, Ander Herrera, in their starting XI, and they suffered the embarrassment of a first home league defeat to Swansea City .

ANDREW YATES/Getty Images
Van Gaal panicked and spent the final weeks of the transfer window rushing around adding unsuitable players, including the £6 million loan arrival of Radamel Falcao from AS Monaco on deadline day.

United, naturally, took time to jell as a team and had to endure a disappointing season in which they finished fourth in the Premier League.

Obviously a sucker for punishment, Van Gaal once again failed to complete his squad before the start of his second season in charge, and having already shed several attacking players, found himself scrambling to sign Anthony Martial on the final day of the transfer window.

Even the expected sale of David De Gea , which collapsed, was left until the final day, spreading confusion throughout Old Trafford during the opening weeks of the season.

It meant that a disjointed United side once again made a slow start to the season, which they never managed to shake off and stumbled to the fifth-place finish that cost Van Gaal his job.

This season, under Mourinho, Manchester United want to have a quiet deadline day.

Manuel Queimadelos Alonso/Getty Images
There will be no more panic buys and rushing against the clock to have late bids accepted.

Having observed the self-harm and naivety of his predecessors, Mourinho instead appears to want a settled squad ready for the new season in the middle of August.

On the first day of pre -season training, United had already completed the signings of three new players.

According to numerous reports, including from Simon Stone of  BBC Sport , United are also pursuing Paul Pogba , but this is being done early so it won't disrupt the start of their season.

As he remoulds his squad,  Mourinho is replacing confusion with certainty and authority.

The signings of Zlatan Ibrahimovic and Henrikh Mkhitaryan , and possibly Paul Pogba , to aid Marcus Rashford and Martial should instantly solve the problem behind United's chronic lack of goals from last season.

But while Mourinho has made United's attack fit for purpose again, he cannot afford to rest easy, for there is still much work to be done on his defence.

United boast a title-winning attack but an inexperienced and possibly vulnerable back four.

OLI SCARFF/Getty Images
Of course,  Mourinho has invested £30 million in the potential of new central defender Eric Bailly , but when he was asked whether his new signing was ready for the Premier League, the Portuguese admitted, “I don't know,” as reported by James Whaling of  the Daily Mirror .

Bailly appears to be a fine signing, young and muscular, but the type of player who should be eased in gradually alongside more experienced team-mates.

But here is the problem: United don't have enough of them in defence.

United's strongest-looking defence would consist of Matteo Darmian , who struggled during his first season in England, or Timothy Fosu -Mensah, who has played only 10 first-team games, at right-back; Chris Smalling and Eric Bailly in central defence; and at left-back, Luke Shaw, still only 21 and just returning after 10 months out with a broken leg.

It has the look of a brilliant defence in two years’ time, but not now.

There should be some concern Chris Smalling, who is still teetering on the divide between dependable and a risk who hasn 't fulfilled his potential, is by some distance the club's most experienced defender.

Smalling, still only 26 himself, would benefit from playing alongside a more experienced and wily player as the junior member of a partnership and not from being the senior partner for Bailly .

Mourinho needs to return to the transfer market for another central defender, for while Bailly is the future, he needs someone for the present.

The simple truth is United are still looking to replace Nemanja Vidic and Rio Ferdinand, two years after the duo left Old Trafford .

Clive Mason/Getty Images
Over the course of his career, Mourinho has built his success on having savvy, dominant and, crucially, experienced defenders at the heart of his back lines.

At FC Porto , it was Jorge Costa and Ricardo Carvalho. In his first spell at Chelsea , he had John Terry and Carvalho again. At Inter Milan , there was Marco Materazzi and Walter Samuel. At Real Madrid , he employed the brilliance of Pepe and Sergio Ramos.

When Mourinho returned to Chelsea in 2013 and guided them to the Premier League title in 2015, Terry, who turned 34 that season, played every game and even came close to winning the FWA Footballer of the Year award.

After securing so many trophies with these defenders, it seems unlikely Mourinho would launch his comeback in management protected by United’s collection of young and largely untested defenders.

The new United manager has been bold and brilliant in the transfer market so far, but he still needs to add more experience to his defence if he wants to bring the title to Old Trafford .