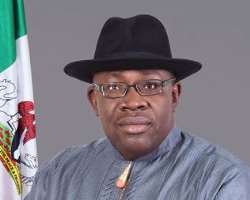 Good leaders are likened to the eagle. In all its ramifications, Governor Seriake Dickson possesses all or most of the qualities of an eagle known for his bravery, courage, honour, pride, determination and grace. In the leadership arena, the eagle is symbolic to human leadership imbued with courage and wisdom. The Eagle does not mix with other birds but only enjoy flying at their high altitude. It is this characteristic that makes eagles unique birds. No matter how big a prey might be an eagle does not surrender, it will always give a fight to win its prey or regain its territory.

Translated in to human affairs, every successful leader is fearless and they face problems head-on. Eagles have a keen vision. Their eyes are specially designed for long distance focus and clarity. They can spot another eagle soaring from 50 miles away. Even when enemies dare the strong vision of eagles keeps the enemies away from its nest. Great leaders with a vision are likened to eagles because they have “uncommon” vision”.

Governor Seriake Dickson is a visionary leader. Most often, the vision must be big and focused enough to produce big results. Eagles can fly up to an altitude of 10,000 feet, but they are able to swiftly land on the ground. At 10, 000 feet, you will never find another bird. They fly and make less noise and painstakingly wait for opportunities to strike their next prey or glide with the current of the storm. Great leaders are problem solvers, they love to take challenges as the eagle does when the storm comes. When all other birds try to flee from the storm eagles fly into it and will use the wind of the storm to rise higher. Great and responsible leaders to rise to greater heights.

Like an eagle, a leader can only rise to greater heights if he or she takes up the challenges head on without running away from it. Ostensibly too, eagles are full of life and are visionary but they find time to look back at their life and re-energize themselves. Interestingly, the eagle never gives up even in poor health. It cultivates the power to regenerate itself through metamorphosis.

Great leaders look back and take stock of their lives during which they x-ray the good and bad experiences they have been through as leaders. More importantly, eagles are known for their aggression and they are absolutely ferocious but they take care of their younger ones. When the mother eagle sees that time has come for it to teach the eaglets to fly, she gathers an eaglet onto her back, and spreading her wings, flies high. Suddenly she swoops out from under the eaglet and allows it to fall. As it falls, it gradually learns what its wings are for until the mother catches it once again. The process is repeated until the eagle begins to soar higher.

By all standards, Governor Seriake Dickson possesses all or most of the characteristics of the eagle: bravery, courageous, visionary and determined enough to move Bayelsa State to the next level. From his leadership style Bayelsans have learnt that there is no “Free Money” and that every kobo must be applied prudently for a purpose. Bayelsans have also learnt work ethics affirming the protestant philosophy that work is worship.

We have also learn that development is possible if monies are prudentially utilized. Like the eagle, Bayelsans have been able to weather the storm even when there was a delay in the payment of salaries and many people are beginning to explore other streams of income for sustenance and or augment whatever income earned from government. Pleasantly, at inception, the Restoration Administration started on “ground zero” in terms of finances. This problem was compounded by the instability fueled by the notorious killer outfit code-named “famou tangbei” and its attendant climate of fear.

Governor Seriake Dickson was brave enough to face the monster of insecurity. Not only was the security architecture of the State re-configured, sophisticated surveillance equipment and other security infrastructure were procured. Cultists renounced cultism, orientation programmes were organized and they were integrated into the society. Like the eagle, Governor Dickson soared above the problem of insecurity in the State through the instrumentality of the law and seeking the cooperation of people. Governor Dickson is a classic example of a man who smiles in trouble, gathers strength from distress, and grows brave by reflection.

This indeed is the acid-test of responsible leadership. Operation Doo Akpor, which is a brain child of the Restoration Administration has been a success story. The security outfit has won awards at the national and continental level. In 2014, Governor Seriake Dickson won a prestigious security award in South Africa. By this award, Bayelsa State was declared as the safest and the most investment-friendly State in Nigeria.

In the same year 2014, the Operation Doo Akpor Security outfit was adjudged to be the Best Crime Bursting Security Squad in West Africa, by the Security Watch Africa. Consequently, the then Commissioner of Police, Bayelsa State Command, Mr. Paul Okafor was given an award by Governor Seriake Dickson. The drastic reduction in crime and criminality made it possible for construction work to go on at accelerated speed without kidnappings and other disruptions. Bayelsa became a construction site.

Having overcome the battle against insecurity, the Administration engaged in aggressive infrastructural development. Public buildings sprang-up, flyovers were built, roads were dualized, and bridges were built. Of interest is the Ogbia-Nembe Road, the Tombia-Amassoma road expansion, the completion of Toru-Ebeni Bridge, the dualization of the Opolo-Elebele Road the dualization of hospital Road, King Diete –Spiff Road and the prestigious Governor’s Office building. Other projects include the Cargo Airport Project and the proposed Agge Ports are examples of investments that are likely to bring in Foreign Direct Investment.

Douglas MacArthur said many year ago and I quote “Build me a son, O Lord, who will be strong enough to know when he is weak, and brave enough to face himself when he is afraid, one who will be proud and unbending in honest defeat, and humble and gentle in victory”. Like the courageous eagle, Governor Seriake Dickson has weathered the political storm.

During his first tenure, he had to take very hard decisions amidst cash crunch to ensure the system survived. His policy of saving money rescued the State from the bailout which was given to all States, which Bayelsa State did not take. The bailout fund would have increased the debt profile inherited by the Restoration Administration. It takes only a dogged leader to resist the temptation of turning down a financial bailout of N12.85billion.

Essentially, the most intriguing aspect of the Restoration Administration is the entrenchment of transparency and accountability. Governor Seriake Dickson exhibited rare foresight and vision in vigorously pursuing transparency as a pillar of good governance. Governor Dickson saw the Treasury as a leaking boat and decided to mend all the leakages. This led to the re-organization of the Central Treasury.

The crowning glory of government’s effort at the pursuit of transparency and accountability is the passing into law, the Bayelsa Monthly Transparency Initiative, in which government renders account to key stakeholders on the income and expenditure on a monthly expenditure. The initiative was extended to the Local Government Councils and other government parastatals.

The results of these efforts was the verification of workers, which led to the weeding out of ghost names thereby reducing the wage bill from N4.8 billion to N3.8 billion. This created room for the employment in some strategic Ministries. Prudential ethics were inoculated into the mainstream Civil Service. The clock-in clock out system was introduced in the Civil Service to check absenteeism.

The Restoration Administration revamped work ethics and introduced ways and means of reinvigorating productivity in the civil service. On the economic meltdown Nigeria is facing now, Governor Seriake Dickson was perhaps the first Governor to understand that an economic downturn was looming. It was he who was the first Governor to raise alarm and started negotiating with workers on how they would be paid because of paucity funds from the Federation Account. It takes the vision of an eagle to anticipate the future.

When Governor Seriake Dickson became took office, Bayelsa State ranked 28 of the 36 States but because of the reforms carried out by Governor Seriake Dickson, Bayelsa ranks 5th across the country and 4th in WAEC ranking. This feat has never been achieved before. This year 2016, Bayelsa State has dropped to 7th position but this is still an alpha when we look at the holistic picture. Efforts are being made to step-up the achievements in this all-important sector.

Governor Seriake Dickson has demystified the expenditure of government money. He introduced the monthly Transparency Briefing Initiative where financial accruals and expenditure is explained monthly to Bayelsans. Bayelsa is the only State that does that in Nigeria. This is the meaning of transparency and open government. In the past government income and expenditure was shrouded in mystery.

Governor Seriake Dickson has restored the fast fading glory of the Ijaw man. Until now the Ijaws were seen as an object of pity, stigmatized, derided and as restive and glued to the entitlement mentality. Today, the Ijaw man has his own identity: his flag, his coat of arm and other insignia of Statehood. Who else could have done this but the visionary leader Governor Seriake Dickson?

He has added value to the dignity of the Ijaw man, pushing hard as it were for the unity of the Ijaw nation, which we lost during the past administration characterized by terror. With a very harsh economy occasioned by the downward spiral of the price of crude oil and an unfriendly Centre, the Restoration Administration has to look inwards especially in the area of agriculture, tourism and taking advantage of existing MoUs for industrialization to meet the three macroeconomic objectives of wealth creation, job creation and poverty reduction.

There is no gainsaying that development, focus, vision and wisdom are in the DNA of Governor Dickson hence he soars like the eagle. Let the eagle soar to take Bayelsa to an assured destination. The economic downturn shall pose a temporary challenge to the development of the State but these obstacles shall fade away like the morning cloud. Amidst these turbulent times, Governor Seriake Dickson is flying higher in statecraft and he needs more wisdom, bravery and courage to fly higher in the firmament of democratic governance.

Disclaimer: "The views/contents expressed in this article are the sole responsibility of the author(s) and do not necessarily reflect those of The Nigerian Voice. The Nigerian Voice will not be responsible or liable for any inaccurate or incorrect statements contained in this article."
Articles by Idumange John
23-9-2016  Bayelsa Subed:  In Pursuit Of Quality Education22-9-2016  Gov. Dickson: The Making Of A Transformational Leader19-7-2016  Gov. Dickson Emphasis On Community Development—justifiable19-7-2016  Bayelsa State: The Crux Of The Matter In Good Governance?6-7-2016  Journalism Practice And The Constitutional Demands On Journalists – An X-ray Of The Foi ActMore...