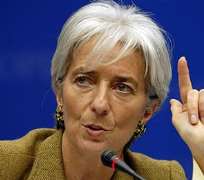 Nigeria's economy will probably contract this year as energy shortages and the delayed budget weigh on output, according to the International Monetary Fund (IMF).

'I think there is a high likelihood that the year 2016 as a whole will be a contractionary year,' Gene Leon, the fund's resident representative in Nigeria said in an interview in the capital, Abuja, recently.

While the economy should look better in second half of the year, growth will probably not 'be sufficiently fast, sufficiently rapid to be able to negate the outcome of' the first and second quarters,' he added.

Africa's largest economy shrunk by 0.4 per cent in the three months through March, the first contraction in more than a decade, as oil output and prices slumped and the approval of spending plans for 2016 were delayed.

A currency peg and foreign-exchange trading restrictions, which were removed last month after more than a year, led to shortages of goods from gasoline to milk and contributed to the contraction in the first quarter.

While conditions that impeded growth in the first half of the year, including shortages of power, fuel, and foreign exchange, as well as the higher price of dollars on the the parallel market, may have been reduced, they still weigh on the economy, Leon said.

The Washington-based lender cut its 2016 growth forecast for Nigeria to 2.3 percent in its April Regional Economic Outlook from 3.2 per cent projected in February. The World Bank lowered its forecast to 0.8 percent last month, citing weakness from oil-output disruptions and low prices. Last year's expansion of 2.7 per cent was the slowest in two decades, according to IMF data.

'Most people would agree that if you should fix one thing in this country, it should be power. There is a need to start changing the power equation from 2016, from today, not tomorrow or later,' Leon said.

Nigeria generated an average of 2,464 megawatts of electricity on June 6, according to information from the power ministry. This is less than half of the installed capacity of 5,000 megawatts for a nation whose population of 180 million people is the highest on the continent. It compares to power generating capacity of more than 40,000 megawatts in South Africa, which has a population a third of the size.

'While inflation will probably continue its upward trend through the end of this year, it is unlikely to exceed 20 per cent,' Leon said.

Price growth accelerated to 15.6 per cent, the highest rate in more than six years, in May and probably quickened to 16.2 per cent last month, according to the median of seven economist estimates compiled by Bloomberg.

The central bank's Monetary Policy Committee 'may be open to tolerating a little more inflation if growth emerges as the priority, as opposed to choking inflation and squeezing the little life out of growth.

'But the central bank in conjunction with the MPC, needs to be clear to participants in markets what exactly their priority is,' Leon said.

The Central Bank of Nigeria left its benchmark rate unchanged at 12 percent in May and will announce its next decision on July 26.

The MPC is likely to increase the rate by 500 basis points in the next year 'to address the prevailing inconsistencies between an accommodative monetary policy and a more flexible exchange rate,' Goldman Sachs said in a note on July 8.

President Muhammadu Buhari signed a record budget of 6.1 trillion naira ($21.6 billion) with a deficit of 2.2 trillion, or 2.14 per cent of gross domestic product, in May after a delay of four months.

'The fact that the budget was passed late means it's likely not all the capital spending planned to boost growth will take place, or it will not be as prudent as initially set out,' Leon said.

If growth falls to zero per cent 'then that's a huge gap the country has to fill,' Leon said. If expenditure stays as planned, and revenue is less due to the lack of growth 'then we should see not smaller but potentially a larger deficit,' he added. - Tribune.